Cloquet's lumberjack logo story is tricky - like a bouncing puck 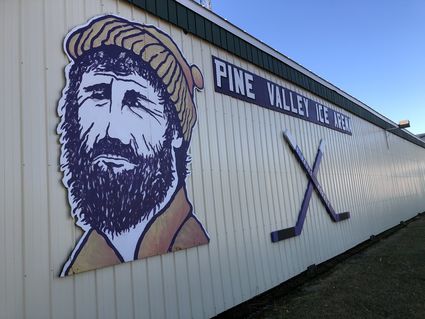 The Lumberjack logo adorns the side of the Barn, Cloquet's first hockey arena

The question of who designed the Cloquet High School Lumberjack mascot logo leads almost immediately to another question: Which logo?

There have been dozens of iterations of the Cloquet Lumberjack. Yearbooks dating back to at least the 1940s, maybe even further, show depictions of lumberjacks. The 1948 White Pine featured a hulking, thickly bearded, flannel-clad lumberjack on its cover, and another drawing of the lumberjack fishing inside.

In the 1960s, a more exotic lumberjack began appearing on cheer sweaters and the front of the varsity boys' hockey jerseys. With dark eyes, brows and a droopy moustache, this lumberjack looked as much like a voyageur as a stereotypical lumberjack. That one was replaced by another, and so it went until something very similar to the current Cloquet Lumberjacks mascot made its first appearance in the 1979-80 hockey season. Wearing a stocking cap, he is craggy and bewhiskered, with lines around his eyes and across his forehead, not a high-schooler lumberjack at all.

The topic exploded on Facebook before and after the Pine Knot News story last week about a Cloquet school board discussion regarding ownership of the logo, which led to the question of who actually created the original version of the beloved high school mascot.

According to a Eyewitness Sports TV interview from 1993 by Ray Higgens, John "Wood Duck" Everson was the creator. In the interview, posted on the "Cloquet, MN - 1884 to Present" Facebook page, Everson recalls being asked to draw the Lumberjack by coach Bill Kennedy. He said he never dreamed the mascot would still be on jerseys some 15 years later.

"I figured it would last as long as the jerseys did," he told Higgens.

The TV interview with Everson included a second Cloquet man: Gary Hedin, a real, live lumberjack that Everson said he modeled his drawing on.

Hedin, who grew up in the Cromwell-Wright area, is still around.

"You're talking to the Cloquet Lumberjack," he said with a chuckle in a phone call Wednesday. He's had a lot of fun with that, says Hedin, now in his seventh decade and a little greyer than he was when he was Everson's only lumberjack friend. He remembers the television crew going to interview Everson at his job at a screen printing business.

"It's kind of fun," Hedin said. He tells how he had 3x4-inch cards made with the Lumberjack logo after it won a statewide mascot competition in 2012.

"They said 'Greetings from the Cloquet Lumberjack,'" he said. "I'd tell them it was me and sign them. I've never made a dime from it, but if the school has made some money from places like Walmart for the schoolkids, that's fine."

But Wait's story is also compelling. The retired art teacher is still around, although living in Oliver, Wisconsin, now. He remembers drawing many different variations on the Cloquet lumberjack over his years as co-owner of Ultimate Screenprinting in Cloquet. He also remembers being asked to make a lumberjack logo, with the first version based on a line drawing on a piece of carbon paper.

When he saw the image on the front page of the Pine Knot last week, Wait said he recognized it as one of his drawings. When he and his partner, Don "Bunky" Hill, sold their screenprinting business to the then-owner of Community Printing, he left a folder full of different lumberjack drawings there.

"We never used clip art," he said. "All the artwork we did for bowling alleys, museums, bars, sports teams, it was all original." That folder seems to be gone now, he said, after calling the Cloquet business earlier this week.

Although both Wait and Everson had careers in screen printing that overlapped, they never met, Wait said.

Wait shows a wood print that he modeled on himself, which shows the same spirit as the current logo. He remembers a conversation with coach Kennedy, when some hockey supporters wanted a lumberjack with a black eye and stitches, and Kennedy said "No," he wouldn't have the image tarnished.

Friends and former co-workers of both men say they're 100 percent certain the current mascot logo was designed by their friend.

And there's no doubt that both men designed one or more CHS Lumberjack logos. Wait is pictured in the Cloquet High School Centennial (1897-1997) book with a new logo he designed featuring a lumberjack with an ax, stocking cap and curlier beard, with three large pine trees across the bottom of the image.

But Everson, though he died in 2012, has more actual historic documents in his favor. He has the television interview, and a glass panel four spots down from the home hockey bench at Northwoods Credit Union Arena that reads: In memory of John 'Wood Duck' Everson / Designer of the Lumberjack Logo. His obituary also states that he designed the Lumberjack logo. 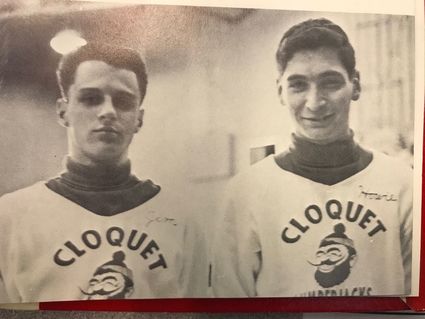 Cloquet Educational Foundation director Jody Acers has followed the discussions with interest. A Cloquet alumna, this isn't the first time she's thought about all the different faces of the Lumberjack through the years, both out of personal interest and because she had her own questions about copyright.

She points out that in the early days of the current logo, it was pretty much a varsity boys hockey thing. Players had to earn the right to wear the Lumberjack.

But the "creator" question is not as important to her as what the image means.

"We've called ourselves the Lumberjacks since the 1930s," she said. "That has been our identity and it's a fantastic symbol of our town and our community."

Wait agrees. He says he's not looking to cash in on the Lumberjack.

"It's been used for 40 years," he said. "What's important is what happens from now on. The mascot will be Cloquet's image in perpetuity, or another 40 years ... or will it?"