You can learn a lot from this monkey 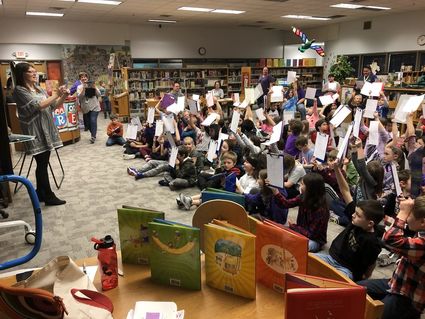 Duluth cartoonist, illustrator and author Chris Monroe takes a photo of third-graders who she had asked to draw her character Chico Bon Bon at Cloquet's Washington Elementary School on Feb. 21

She walked the kids through various versions of Chico Bon Bon, the star of her "Monkey with a Toolbelt" series of children's books.

"He looks like a horror monkey," said one child of an earlier version.

Monroe did lots and lots of sketches before she arrived at her true vision of her tool-belt wearing, fix-it-or-build-it monkey.

"Eventually I found him, so don't give up," she told the budding artists.

Monroe visited both Washington and Churchill elementary schools Feb. 20-21 as a visiting author in honor of "I love to read month," said Cloquet school librarian Jill Elwood. Funding for her visit came from both the Cloquet Education Foundation and the PIE groups at each school. John Coy visited Cloquet Middle School.

At Washington, the kids were delighted to hear Monroe's stories of her own childhood, where she gets her ideas and a lesson in how to draw her most famous character, Chico Bon Bon, whose books have been published in Chinese, Japanese, South Korean and Swedish. Locally, Monroe is well known for her Violet Days cartoons, a weekly comic strip (on hiatus now) that ran for 22 years and appeared in both the Minneapolis Star Tribune and the Duluth News Tribune.

Another tip from Monroe: Use your own life for your ideas.

"I worked in a hardware store so I knew a lot about tools," she said. She encouraged kids to look at the world around them for ideas. One of her characters sprang from a lawn ornament that she liked, another from a dog that would always stand on its hind legs at the end of its leash.

She rattled off some more tips: "Create a character that can have lots of adventures. Invent friends for your character."

Keep doing art, and keep trying. It took Monroe years to get to the point where she could quit her day job (working at Marshall Hardware Store) and work on art and illustrating full-time.

Chico Bon Bon - able to avert disasters with construction skills, smarts and wit - has been an important part of that journey.

The monkey with a toolbelt will have its own preschool series streaming on Netflix in May. She also has another Chico book coming out in August, that will feature Chico Bon Bon going to space.

Monroe said she really enjoys her school visits, and appreciates the feedback. For example, it was kids who told her that her "Bug on a Bike" needed to have a helmet.

"I love coming because I just get a lot from the kids, their energy and enthusiasm," she said. 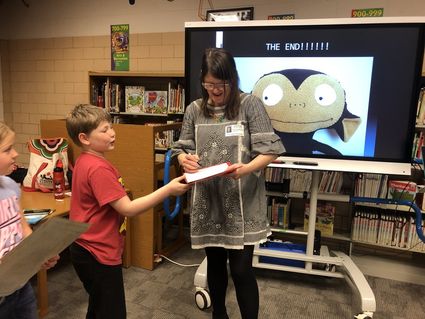