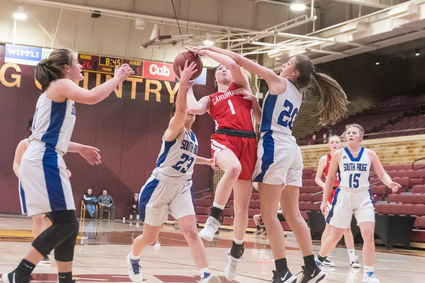 Cromwell-Wright's Taya Hakamaki gets fouled by Raina Schneider of South Ridge on a drive to the basket during Section 7A quarterfinal action at the University of Minnesota Duluth. The Cardinals are coasting by the competition so far in the playoffs

Notice has been served to area basketball fans by the Cromwell-Wright girls basketball team. The Cardinals were bound for the Section 7A championship game Thursday after convincing wins over Chisholm and South Ridge in the playoffs.

The Cardinals defeated South Ridge in the quarterfinals Saturday, 70-19.

On Monday night the Cards dispatched Chisholm in the semifinals with a 81-23 score at Romano Gym on the University of Minnesota Duluth campus.

So far in the playoffs the Cardinals have stuck to the same recipe and script: to attack on defense early and to build a big lead off turnovers.

"We have just been able to clamp down on teams in the early going on the defensive side and that allows us to get out and run and get easy baskets," said Cardinals coach Jeff Gronner. "We actually did not shoot very well from (the three-point line) in the game against Chisholm with the exception of Shaily Hakamaki."

It was apparent early versus the Blue Streaks that the script was right on course as Taya Hakamaki and Shaily Hakamaki combined for 45 points and seven three-pointers. Taya finished with 23 points and Shaily added another 22 points in the win.

"They played a zone and we got plenty of open looks and most of them did not go in," Gronner said. "Fortunately we also got many easy ones at the basket in the half court offense and in transition."

On Saturday, Cromwell-Wright displayed the same menu for success against South Ridge by racing to a 47-8 halftime lead as they put things on cruise control and took the win.

"They can just do everything well," said Panthers coach Brad Olesiak.

"Their pressure defense is tough and they have four girls that shoot the three-pointer well and a good post, plus they have two girls that can create their shot at any time."

Taya Hakamaki led the scoring charge for the Cards with 22 points. Shaily Hakamaki finished with 18 points while Natalee Hakamaki also was in double-figure scoring with 10.

"We just played our solid half court defense with mixing in a little half court zone trap," Gronner said. "We did a good job of pushing the ball and transitioning to quick offense."

Both Emmalee Hoover and Sascha Korpela finished with six points for the Cardinals. Brandi Collman added three, Ryle Dobosenski and Andrea Pocernich scored two each, while Katherine Libbon finished with one.

Leading the Panthers were Adella Olesiak with seven points, Svea Snickers with five, and two each for Lexi Bergum, Phylesha Preston and Raina Schneider. Alana Young added one point.

The margin of victory in both games allowed Cardinals coach Gronner to empty his bench and get valuable playing time for younger athletes that will only help Cromwell-Wright's cause in the future. 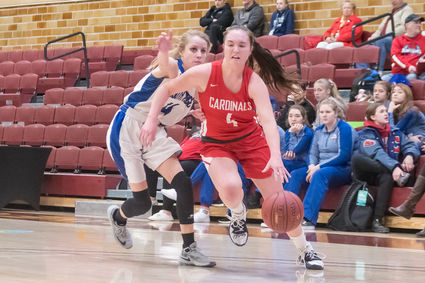 "It's always nice to get many girls playing time on a big stage like UMD," Gronner said. "I was very happy with the fact that we jumped out early on them and took care of business like the seasoned team that we are."

The Cards will now play in the section championship game against No. 2 seed Mountain Iron-Buhl, a team which beat them in the same game a year ago. The game was scheduled for 7:30 p.m. Thursday, March 5, at UMD.

The Cromwell-Wright girls basketball defeated longtime nemesis Mountain Iron-Buhl 68-43 to win the Section 7A championship Thursday night at UMD. The Cardinals, which are ranked No. 2 in Minnesota Class A girls basketball, will play unranked Belgrade-Brooten-Elrosa High School in the quarterfinals at 3 p.m. Thursday, March 12 at the University of Minnesota's Maturi Pavilion.