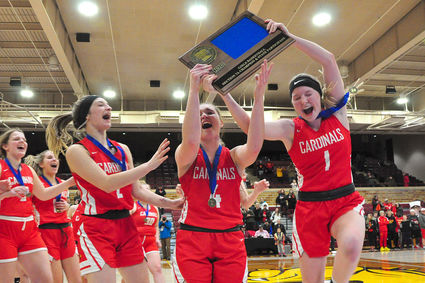 Taya Hakamaki, right, jumps for joy next to cousin and Cromwell-Wright teammate Shaily Hakamaki as they hoist the Section 7A championship trophy. Emmalee Hoover moved in to join the two along with the rest of the team after a convincing win over Mountain Iron-Buhl in Duluth Thursday. The Cardinals opened play in the state tournament Thursday.

A year ago the Cromwell- Wright girls basketball team sat on the doorstep of the Minnesota State Basketball Tournament. In their path was the Mountain Iron-Buhl Rangers, a team that the Cardinals had manhandled earlier in the season. Instead of heading south for the state tourney, the Cards headed home after suffering a devastating defeat.

Flash forward to last Thursday with the same scenario in play, but this time the Cardinals proved their resilience by claiming the Section 7A title with a convincing 68-43 win.

After a tightly played first half, the Cards led just 28-24, but things changed in the second half. Cromwell-Wright went on a massive 40-19 run to win easily.

"We didn't change anything for the second half, we just shot really well and we went 9-of-10 on 3 pointers in the second half and a total of 62 percent field goals for the game and 68 percent from the 3-point arc for the game," coach Jeff Gronner said. "You're not going to lose often doing that."

In all the Cards hit 13 3-point shots in the game with Taya Hakamaki leading the scoring charge with 28 points. The year before, MIB had changed its defense going into the title game by going to a triangle and two - a move which frustrated the Cards as they struggled to score.

"We had prepared all season to see a triangle and two," Gronner said. "Not many teams did it all season so we just had to rely on practice to get better at it. MIB played a triangle about half the game."

It didn't seem to matter what defense was thrown at the Cards as they handled everything the Rangers could throw at them. Whether it was the 28 points from Taya Hakamaki, or the 15 and 11 points, respectively, from Shaily Hakamaki and Emmalee Hoover, the Cardinals were in top form.

Nothing would get in their way to claim the Section 7A champion- ship.

"They kept switching defenses on us," Gronner said.

"Defensively we switched pretty much all screens and worked to keep girls in front of us. In the first half they shot well, but then we clamped down a little more on the D-end and less of their shots fell." 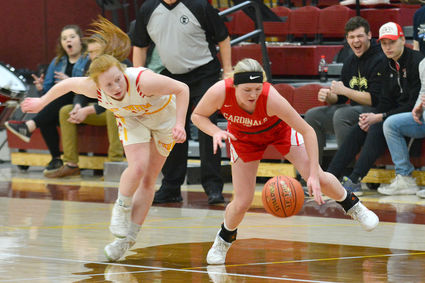 Taya Hakamaki steals the ball from Mountain Iron-Buhl Thursday during Thursday night's championship game at UMD. Defensive pressure all season long is one reason the Cardinals were headed to state this week. MIB had won nine-straight section titles.

That solid defense proved to be vital in the second half as the Cardinals held the normally high scoring Rangers to just 19 points allowing Cromwell-Wright to put the game on ice.

Key for the Cards was an unexpected push from the 3-point line from both Hoover and Andrea Pocernich, who both had three long-range bombs.

"To have Emmalee and Andrea step up and each hit 3 threes was huge for us," Gronner said. "Shaily got hot early in the second half and sparked our run."

Also scoring for Cromwell-Wright were Natalee Hakamaki with three points and Amber Collman with two.

"It was a feeling of relief when we won," said an excited Gronner. "Thursday night was pure satisfying relief that we got the job done that we set out to do."

The Cards were scheduled to play on Thursday afternoon in the state Class A basketball tournament against Belgrade-Brooten-Elrosa after this issue of the Pine Knot News went to press.