Keeping up with and coping with the coronavirus pandemic 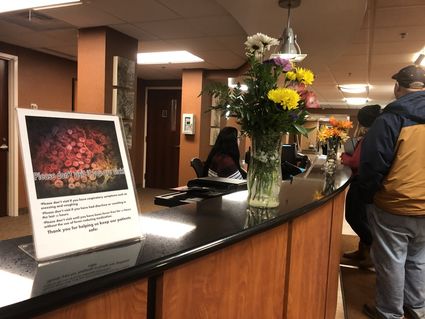 People seeking medical care that they think is related to COVID-19 are being asked to call health care providers before coming in, including at Cloquet Memorial Hospital. It has a sign at the front desk urging visitors to help curb the spread of the virus.

Days, hours, minutes and seconds. International, national, statewide, and home. In a whirlwind the past 10 days, life in Carlton County and the world has changed in response to a deadly respiratory disease pandemic.

Schools are shut by order of Minnesota Gov. Tim Walz - as are bars, restaurants and other public gathering spaces until at least the end of the month and likely much longer. We've been told to not gather in groups of more than 10 people. In short, stay at home, gather supplies when needed.

The innate notion of banding together to get through a crisis has been thwarted, at least physically. Adding to the psychological upset is the virus itself, invisible, possibly lurking. Even more vexing in the past week is that the seven-county statistical area of northeastern Minnesota has not had one confirmed case of COVID-19 as cases build in the Twin Cities metro area and counties to its west and south. It's likely just luck, or a lack of testing, or that we are adhering to the direction of health experts to slow the spread by keeping our distance from others. We just don't know.

A barrage of words and phrases have crashed in all around us - social distancing, flatten the curve, shelter in place, wash your hands, unprecedented, and, the most vexing - "We just don't know."

The new coronavirus and the disease borne from it, COVID-19, has swept across the globe, leading to thousands of deaths and sickening many more.

We watched the news the past month as countries became inundated with cases. Italy shut down its whole country. Cases exploded on the west coast of the United States, mostly around care facilities for older people, the most vulnerable to the virus.

The first reports out of China about a "mysterious" new respiratory disease came just after the holidays. By the middle of January, the first deaths were attributed to a novel coronavirus believed to have begun in December in Wuhan, China. Since then, there has been a steady march of infection across the world.

But even until last week, things looked isolated in the U.S. We went about our regular business. On March 11, word was received that an NBA player had contracted COVID-19. The league suspended its season. President Donald Trump spoke to the nation that Wednesday night. Stocks on Wall Street were tumbling.

Other sports leagues followed the NBA lead on Thursday. The Minnesota State High School League continued its winter sports seasons, including the girls basketball state tournament featuring Cromwell-Wright. The Cardinals won their quarterfinal game on Thursday, continuing a dream season. That all came crashing down on Friday as the league suspended the tournament and all sports indefinitely. Suddenly, the season was over for the Cardinals and the Esko boys team, which had reached the section final.

By late Friday, all sports and other activities national and statewide had been suspended, which led to an eerie weekend for many. Concerts and other entertainments were canceled. Events such as the annual Cloquet Chamber of Commerce Home, Business and Sports Show went by the wayside. The trickle had become a stream and was soon to be a flood.

On Sunday, Walz announced that K-12 schools had to close by Wednesday. An order for bars and restaurants came Monday. Schools and businesses were now clamoring for a Plan B in a world where everyone was supposed to stay home.

Trying to make it all work is a daunting task.

Many restaurants will move to pick-up service. The sign at Gordy's Hi-Hat went from "Opening March 19" to "opening soon." Cloquet's trademark rite of spring would have to wait.

Carlton school district superintendent Gwen Carman went through her district's plan to teach and care for students at a school board meeting Monday. "All of a sudden, in 48 hours, we are doing everything different," she said.

Adam Bailey, owner of The Jack in Cloquet, said that the conversation in a busy bar the weekend before the forced closings was "delicate." Even the usually outspoken patrons were taking a cautious view, he said. "Nobody really knows what's going to happen."

Many businesses are finding ways for people to work at home. Others have staff working, but are closed to the public. Bank lobbies have closed, asking customers to use the drive-throughs only. Most public buildings are closed as well. Dentists have been told to shut down through March 27, as have hair and nail salons. The best practice, if one has to venture out, is to call first and find out what the new protocols are. 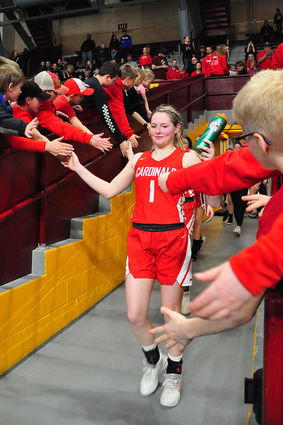 Cromwell-Wright basketball player Taya Hakamaki enters an arena at the University of Minnesota during the Minnesota State Girls Basketball Tournament March 12. The image of Hakamaki being greeted by a sea of hands in a venue full of fans is in stark contrast with how things looked in the state just hours later. The Cardinals won their opening game but the tournament was soon canceled along with virtually all other sports and activities statewide and nationally as social distancing was stressed.

It's the new world order, and all many of us can do is wait it out. The news is filled with experts talking about how we suddenly go from our busy daily routines to one that entails most everyone at home. Memes are buzzing around the internet about using the downtime to get creative. People are offering live-feed yoga classes and musical performances. Museums and art galleries are offering virtual tours.

And then there is the great advantage of living in Carlton County. Outdoor spaces. While state park services are suspended, the grounds are still available for visitors, as are the numerous trails and other recreation spots in the county. Keep your distance from others and you'll be fine, health experts say. (But stay off playground equipment.) It's a good way to practice keeping healthy, both physically and mentally.

As one county school official said this week: "Everyone has to be adaptable."

The flurry of changes in the world as we know it the past 10 days, minute by minute, is in direct contrast to the new reality of waiting. Waiting until the virus spread subsides. Waiting for normal to return.