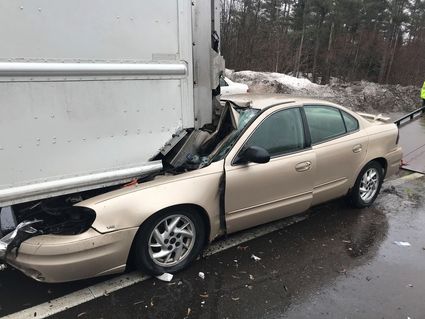 A car rammed a semi-trailer March 12 on Highway 45 in Scanlon. A 20-month-old child in a rear car seat was uninjured. The driver was taken from the scene in an ambulance.

Cloquet Area Fire District firefighters responded to a fire Wednesday, March 18, on the 1200 block of Carlton Avenue in Cloquet.

CAFD battalion chief Gordy Meagher said the fire was confined to a small room on the third floor of the house, and everybody was out when they arrived. The firefighters used the ladder truck to reach the top of the home.

"We got it extinguished quickly," Meagher said, adding that they vented the roof and checked ceilings inside to make sure the fire hadn't spread. Water and fire damage was not too significant.

"It was pretty cut and dry," Meagher said, adding that...