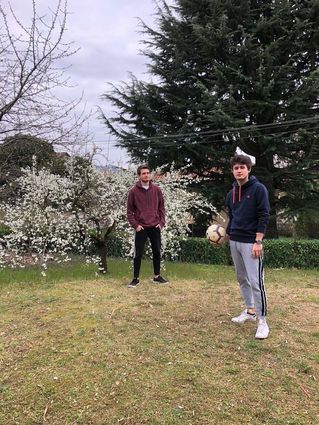 Former Carlton High School exchange student Giorgio Petri, right, and his older brother, Paolo, play with a soccer ball in their backyard during quarantine in Italy, where the coronavirus pandemic is keeping everyone but the most necessary workers at home most of the time.

While news media paint the situation in Italy with COVID-19 as truly dire, a former exchange student thinks the government there is taking the correct actions to turn the tide of infection.

Giorgio Petri, 19, went to Carlton High School and lived with Chris, Heidi, Scott and Spencer Rousseau during the 2017-18 school year. He was a top player on the Cloquet-Esko-Carlton soccer team during his time here, and is now a student at the University of Milan.

Like most college students in the United States, Petri is now studying from home. The Pine Knot News chatted with Petri on Sunday to find out what was happening there and what kind of advice he might have for folks in Carlton County.

Q When did life begin to change, and how?

A Schools closed one month ago, Feb. 21. I remember the first positive person was found on a Friday, and by Sunday we knew that schools were closed. First they said it would be for a couple weeks, then until April 3, now they say until April 15.

Q Can people still go places or do they have to stay home?

A Today they signed a new act and decided to shut down every type of (business) activity except banks, pharmacy and medical.

There are basically three reasons we can leave home: for work, to go get food and grocery, and if we have medical problems or a situation. Until yesterday (March 21) we were allowed to have a walk or do sports outside by ourselves, maybe go for a run alone. Sports or activity alone are not a reason anymore until April 15.

Q What happens when you have to go out?

A When we go out, we need to have auto certification (a form people print from an official government website, he said) because we need to specify on paper why we are leaving home, where are we going and when will we be back. Just print out paper, and fill it out. Then if officers stop you when you are out, then you have to show paper. They will make calls to make sure you are going to work, stuff like that.

Q How has it affected your family?

A We are all healthy. My mom is a doctor and works at a hospital and my dad works at a bank, so both of them are still working while my brother and I have classes online. He's 21. I'm 19. Online classes are OK. Teachers do lectures like if we were there. The only thing missing is discussions.

Q Has anyone close to you gotten sick? The news reports say it's really bad there.

A I don't know anybody personally that is positive. For now we only have one certified case in my town (Angera, with a population of about 6,000, outside of Milan).

The problem is that many hospitals don't know what to do, they have so much work and patients to try to work with. Mom says we don't have to underestimate the problem and the danger. It's true we have many patients that have gotten sick, but I think the rest of Europe and the U.S. are probably catching up with us.

The situation is serious, but you don't have to think we are starving, or dying closed in our houses. It's serious, but we can handle it.

Q How do you stay sane when you're home all the time?

A I'm lucky. I have a backyard, I can go out and play, switch my mind off. I think I'm playing more with my brother now than I ever have before.

Many live in big cities, in flats. I think way worse for them (because they don't have an outdoor space to go to). We are aware it's not the best moment, and trying to stay strong. At 6 p.m. every day, we sing the national anthem from our windows. We use social media to organize events at 6 p.m. or noon. It's something to try to take our minds off (of what's happening).

Q What kind of advice would you give to people here, especially young people that you knew when you were here?

A I would say, first, that they should not underestimate the danger. We've had many deaths, mostly people over 80. But the fact is that young people, ages 20-30 are at hospital in very bad condition. Don't think since you're young, you won't get anything. We took it as vacation when they first closed schools, but soon realized it was more serious.

If it's not that serious (in Minnesota) yet, try anyway to limit contacts with other people and friends ... because it's very easy that the virus can spread out very, very fast. Better to limit before, rather than being stuck at home trying to avoid contact with any positive people.