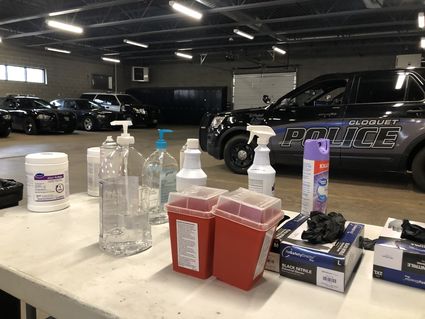 Cloquet police officers have a table stacked with materials for sanitizing vehicles and themselves.

For public safety officials, the coronavirus pandemic made an already dangerous job even more risky. Now, when officers are called to a local store to respond to an intoxicated person who is out of control and - worse yet (during a pandemic) - coughing all over people, the officers should also take time to put on masks and eye goggles or a face shield as well as gloves.

That was an actual call earlier this month, explained acting Cloquet police chief Derek Randall, and the officers did not wear their masks. Thankfully, the woman did not have symptoms of COVID-19, according to jail officials, and the officers were not infected.

It was a learning experience, Randall said. It's tough to remember to pull on some rubber gloves and face protection (and maybe some kind of plastic clothes covering) before responding to a crime in progress.

But it will be worth the delay, he said.

A department the size of Cloquet's will struggle if people get sick, or have to quarantine themselves for 14 days because of contact. On the flip side, he said, if you let them work after possible contact, they could easily infect the entire department.

So every officer has to think about hygiene and masks and more - on top of their actual job training - when they're racing to respond to a call.

"It might be overkill to put on gloves and a mask to respond to a call about interpersonal issues, and you may be able to remain at a safe distance," the acting chief said. "But you really aren't going to have time to mask up or glove up if something goes south. So I think they've been doing a good job."

Another recent achievement was finding a thermometer for the department. It wasn't easy. Basic supplies have been tough to get, but Randall said he feels fortunate after talking to friends in law enforcement in New York City.

They told horror stories of the number of officers who've gotten sick, some who died, and a lack of personal protective equipment (PPE). One friend there supervises a detective unit of 12 people, and nine of them are sick. Others are being told to spray down their disposable N95 masks at the end of a shift with a solution of half water and half rubbing alcohol, and wear them again after they dry.

"It's crazy out there," Randall said. "My friend was telling me, 'We've been through 9/11, we are the largest police department in the world and we just weren't ready for this.' One third of their department, 8,000 cops, were sick last week when I talked to him. But that was the day the city had over 700 deaths."

Conditions are far better here to begin with. Officers don't have to share desks and sit side-by-side in the office. Cloquet has enough PPE, for now anyway.

And law enforcement agencies across the country have learned from the experience of places like NYC. Randall said he's been on many conference calls and webinars with other police chiefs regarding best practices, and he is trying to keep his officers here as safe from the virus as he can.

It means lots more cleaning of squad cars and at the police station in addition to constant handwashing and other personal hygiene measures.

A table sits inside the police garage there, covered with hand sanitizer, sprays and Oxivir wipes that both clean and disinfect, killing most common pathogens in 60 seconds, good against fungus, bacteria, viruses and more.

Randall has also asked his officers to bring a change of clothes to work. In case of potential contamination on a call, they can come back to the station, sanitize, put their uniform in a plastic garbage bag, shower and change into clean clothes.

A few officers are already adopting the practice of changing in and out of their uniforms at work, utilizing the showers there.

"That way they limit the exposure to their families," he said.

Another way the city and county - and law enforcement agencies across the country - is working to keep officers safe is to limit their exposure to people.

The CPD has a new form on its website for people who are victims of nonviolent, non-emergency crime; otherwise, officers will handle via telephone rather than going out in person. When officers do go out, they practice social distancing, and the CPD requests that residents meet officers outside of the residence when possible.

"Our calls for service are down, but the types of calls have changed," Randall said. "We're now starting to see more calls directly related to the stay-at-home order. Domestic-related calls are up, complaints about people and businesses violating the order are up, and our shoplifting calls appear to have remained consistent."

Like Cloquet, the Carlton County Sheriff's Office is taking reports for lower-level crimes over the phone to protect both residents and staff from exposure.

"Response has not changed for in-progress crimes, crimes against persons and violent crimes, and arrests are being made for these crimes," explained Steve VanKekerix, office/systems administrator and co-acting emergency management director for the sheriff's office.

Unlike Cloquet - where the 12-hour shifts didn't change - the sheriff's office implemented alternative schedules and alternative work sites to enhance social distancing, which both protects staff and provides for continuity of operations, VanKekerix explained. Only dispatch employees can access the 911 public safety answering point. The dispatch schedule has been changed to limit cross contact. Work stations are being cleaned and sanitized more frequently.

The sheriff's office has also struggled to find PPE, but their logistics section has done a good job of fulfilling resource requests, VanKekerix said.

In the jail, precautionary measures have been put in place to protect inmates and to keep staff safe, healthy, and able to work. Cleaning supplies are available at all times for inmates. Access to the jail is limited to Carlton County staff. No on-site visiting is allowed, and there are no volunteer staff coming into the facility.

"We are completing screening every day for all new intakes, jail staff, and law enforcement officers who enter the jail," VanKekerix said. "All new intakes receive a surgical mask and are quarantined for 14 days."

Anyone reading the jail location list since the pandemic was declared, can see that jail numbers are down significantly. That's deliberate, said VanKekerix.

He explained some of the changes. Officers are being asked to issue citations in lieu of arrests for low-level non-person crimes such as trespass and driving after suspension. They are also being encouraged to seek county attorney review and long-form complaints for non-person felony crimes.

Arrests are still being made for in-progress crimes, crimes against persons, and violent crimes such as domestic abuse, violent assaults, child abuse, and DWI.

Transports are being limited as much as possible.

"We do not want to bring inmates from other facilities or other parts of the state, where the disease is more prevalent, into the Carlton County jail," he said. "We are using ITV for court appearances and video for meetings so that inmates do not have to leave the jail." 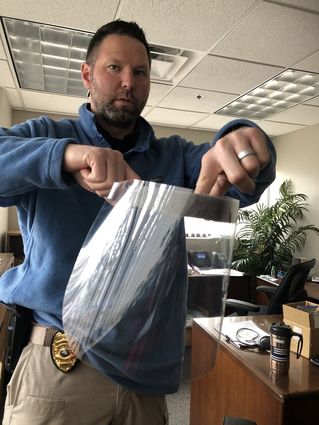 Acting Cloquet police chief Derek Randall shows a face shield that officers are encouraged to wear in cases where they could be infected by the coronavirus.

Finally, he noted, according to Minnesota Chief Justice Gildea's continuity of court operations orders, which outline judicial branch case priorities, the courts are holding hearings for only the high-priority cases. So court cases are also way down.