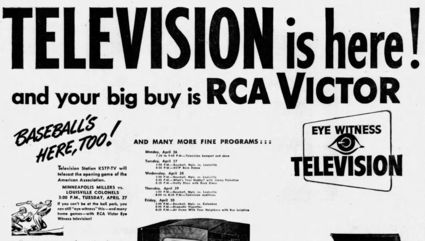 A television advertisement from 1948 also touted the first TV broadcast made in Minnesota.

1956 The first baseball game is played at Metropolitan Stadium in Bloomington. The Wichita Braves beat the Minneapolis Millers, 5-3.

1924 A race to break the world record for the longest distance traveled in a hot air balloon ends in Rochester as the winner, W. T. Van Orman, lands the Goodyear III just under the world record distance (1,179.9 miles). The race had begun in San Antonio, Texas, and the three top finishers would soon represent the United States at the international competition in Brussels, Belgium....