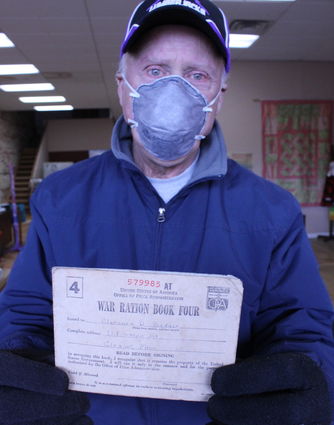 On a recent visit to the Pine Knot News office, Clarence Badger shows the WWII ration book he had when he was about three years old.

In March of this year, I turned 81. This is the first year that it was a very quiet and reserved celebration with my wife, as it has always been a time for my family and friends to come together and celebrate.

On the bright side, staying home more this past month has given us time to clean and go through my office, which is full of family history. Our home has become a collection of memorabilia, filled with photos and diaries of my family history. The collection goes from the 1800s to the present. I hope to sort things out and put the thousands of pictures in some sort of family order before I run out of time or memory.

As I was going through these boxes and albums, I discovered a World War II ration book with my name on it from when I was 3. It brought me back in time to my early years.

In my first month of life, my mother and dad and three young children - all under the age of 6 - moved from Park Avenue to Larch Street in Cloquet.

The house cost $700 and my parents paid for it by making $5-a-month house payments. It was a very basic house, built after the fire with no insulation, no sewer, one bedroom, no basement and a wood-coal heater in the front room. It had electricity and an outside toilet, which we used for many years before sewer lines were put in.

My younger sister was born a year later.

My dad was a truck driver for Carter Trucking until 1942, when he left us and went to California to work in the shipyards to build ships for World War II. He sent a little more than $10 a month for his family of five, still in Cloquet, to live on.

Thank goodness we all continued to live in Cloquet. My wonderful mother had to do many odd jobs - sewing, housekeeping, waitressing - to keep her four children fed, clothed, warm and cared for.

My mom, Mae Beseman, was the oldest one in her family. The Beseman family farm in Wright was our lifesaver, providing us with food and firewood on a regular basis.

We spent weeks and months on the farm in the summer. To get there, our family would walk from our home off Big Lake Road to Scanlon to take a bus to Wright, then walk to the farm from there. We did chores like planting and weeding vegetable gardens, putting up hay, taking care of animals and more. All of my mother's brothers had been drafted, so we did all that we could to help out from a very early age.

During World War II, each member of our family received a war ration book with removable stamps good for certain rationed items like sugar, meat, canned goods and cooking oil. We mostly shopped at the Vnuk's store on Laurel Street, a couple blocks away. Sometimes I'd go ask for free dog bones, and Mr. Vnuk would always make sure there was meat on the bone because he knew we were using them for soup.

All the members of my family had to work at a very young age to help make ends meet daily. We would babysit for 25 cents a night, or shag balls at the golf course for 10 cents. (We had to stay alert, and dodge the balls at the same time.) I had a trapline for snaring snowshoe rabbits in the local woods and the Cloquet golf course for meat. During the summer it was fishing on the river or lakes that we could walk to. We always had food on the table, and we had to sit at the table until our plates were completely finished, no matter how long.

A penny, nickel or dime was big money to us. If we saved carefully, we could go to a move at the Leb or Cloquet theaters for 9 cents; otherwise, we listened to the radio in the evenings for entertainment.

I have always been very proud of my mother because of her dedication to each of us, no matter what hardship she had to endure. This was true of many families living in our neighborhood. My mother was a very proud and independent person and would not accept charity without doing something in return. She was told many times to go on welfare to get help, but she refused. She did finally agree to have one of the two county nurses come and check on us once a month, because she was always concerned about our health. It was usually Mrs. Backus who would do it. She was one of the nicest and most concerned people anyone would ever want to have come to their house.

My mother remarried after eight years of taking care of four children and providing for us during those early years. Our family grew by one more son from her second marriage, and we all moved into a bigger and nicer home with three small bedrooms. It was just a few houses away from our old house, still on Larch Street. Mother rented her house for a few years until she got a divorce and then it was back to our old one-bedroom house, but with six people (bigger now) instead of just five.

Our neighbor, Mr. Millen, worked at Northwest Paper Company and helped my mother get a job at the mill. With a steady job and income, life changed for the better. I was in high school by then, in the 1950s, and Mom finally had a salary. It meant we could afford to live like a normal family.

As we grew older, the house got less crowded. My older brother joined the Army Tank Corps and fought in the Korean War in the early 1950s. Over the years, all the boys in the family joined the military.

When my mom was working at the paper mill, I had the opportunity to work there in the summers, and that gave me enough money to pay for college following high school. I went to UMD from 1957 through 1961 and got a business and accounting degree. I joined the Air Force, then the Air National Guard 148th in Duluth. After six years of serving part-time and working in computers in the Guard, plus working for a CPA firm, I got my master's degree in teaching from UMD in 1964.

I was very fortunate to be able to return and teach in Cloquet after teaching in Winona for two years. I helped both schools set up a computer system for grading, payroll, budget, census and more. 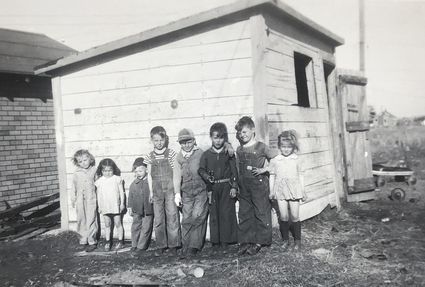 A gang of children in front of the Badgers' outdoor toilet and coal shed in 1945. Clarence is third from the right.

Cloquet has been a wonderful city to live in and raise a family. I was able to teach and run a number of small family businesses to help others and my family over the years.

Being home for the past few weeks has given me time to reflect on how life has shaped me over the past 81 years. It is important to be able to look back and remember how your life changes you during not only hard and difficult times, but also the good and wonderful times of being part of the Cloquet and wider Carlton County community.

Pine Knot News subscriber, and one of Cloquet's most engaged citizens, Clarence Badger agreed to share his story as a way to give people hope in a time when they may feel worried, and to let them know that despite challenges over his 81 years, life has always gotten better and better, and more enjoyable and rewarding.