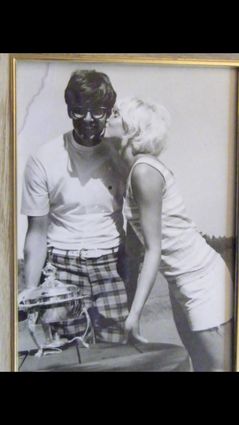 Charlie Jensen accepts the trophy for winning the Cloquet Invitational in 1970. He was 21. He also earned a smooch from his caddy, Sue Stillwell.

Charlie Jensen was a successful Cloquet golfer who learned by watching others and trying to duplicate their methods.

He grew up on Summit Avenue in Cloquet, about a block from the Cloquet Country Club. His parents were active members at club. He thinks he was 7 or 8 when his parents gave him his first golf clubs. They were an older set of clubs with the shafts cut down, so they were appropriate for his size.

He mostly putzed around in the yard but Jensen remembers it was his mother who took him on his first official nine-hole round. She bragged about it for years, saying Charlie never three-putted a green, even on his very first round.

Jensen watched professional golf in its infancy on TV, and every year his mother and father took him to the St. Paul Open, a professional tournament at Keller Golf Club. Jensen decided golf was "pretty cool." This was the 1960s, and some of the PGA pros who won at Keller were Don January, Ray Floyd and Doug Sanders. He studied them to emulate their play. He even got hit by an errant shot off the club of future CBS golf analyst Ken Venturi. Jensen said he was too embarrassed to tell Venturi that the ball hit him.

As part of this learning-by-observing system, Jensen followed and sometimes caddied for the Cloquet Country Club's finest golfers, including Cal Carlson and Butch Newby. He'd then go out in the afternoon with his buddies and play several rounds, and afterward still hit "shag" balls on the practice fairway.

His golf skills progressed, and he made the Cloquet high school golf team as a seventh-grader. Jensen qualified for the Minnesota State High School League's state golf tournament his final three years of high school. His best finish was 20th as a 10th-grader.

Other activities that kept Jensen busy included playing as a center (he was tall) on the CHS basketball team - his senior year his team lost to eventual state runner-up Duluth East - and playing the electric guitar in several of his own bands.

After graduating, he enrolled at the University of Minnesota but did not try out for the golf team.

In the fall of 1969, Jensen's senior year at the U, he was asked by Gopher golf coach Les Bolstad to play in a tournament primarily for lettermen and a few potential team candidates. Jensen vividly remembers his scores after 36 holes for two days on the university course: 75, 72, 73, 73. He finished second. Bolstad invited Jensen later to play nine holes with him, but he didn't get a scholarship offer.

Jensen's pinnacle golf year was 1970. He won the Wood City Classic, a June golf tournament at CCC with more than 100 participants.

In July, he won the prestigious Cloquet Invitational in a 180- player field. In the semifinals, he beat left-hander Tony Greaton from Hibbing. Jensen said that Greaton told him "I was two under par after 16 holes and lost. That was the best that I can play." In the final, Charlie beat golf legend Butch Newby on the 18th hole, one up.

In August, he won the CCC club championship. After winning, Jensen signed up to play in the Minnesota Golf Association Tournament of Champions.

This was a tournament of all Minnesota club champions from across the entire state.

It was a dreary, misty, chilly fall day in Lakeville south of Minneapolis. Jensen had never played the now defunct Honeywell Country Club course before. He started out with a double bogey but finished the next 17 holes one under par for a total score of one over par.

He won the tournament.

Jensen said there was an awards dinner after the event in the golf club dining room that he didn't know about beforehand. Everyone else changed clothes and came dressed up. "I didn't have other clothes and looked like a drowned rat," Jensen said. He said he made attendees laugh when he accepted the first-place award by saying "Today's weather would have been considered a nice day in Duluth or Cloquet."

Jensen won a few more Cloquet Country Club golf club championships and did well in several other regional tourneys. Other golf accomplishments include once having six birdies in a row but on different nines at CCC.

In the 1990s, Jensen used to visit his parents, who were retired, in Arizona. He would go and watch the PGA Phoenix Open, play golf, and enjoy the sunshine while escaping from the Minnesota winters. Of all things, while putting on suntan lotion on himself, he hurt his back.

"I haven't been able to take a full golf swing ever since," Jensen said.

He's retired from a longtime job in St. Paul and still living in the Twin Cities area.

"My golf clubs and my bike pretty much stand in the corner of my house and gather dust," Jensen said. He still collects and tinkers with guitars.

Steve Korby's interest in writing goes back to when he was in fourth grade and editor of the Scan-Satellite school newspaper in Scanlon. He welcomes human interest stories and tales about Carlton County residents.