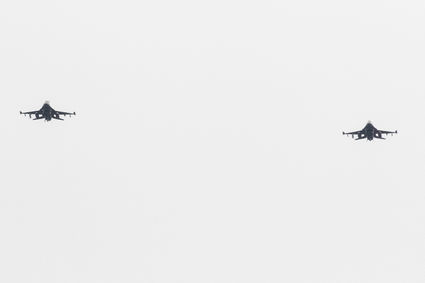 Minnesota National Guard and 934th Air Wing of the Air Force Reserve pilots flew over the state Wednesday to recognize those on the frontlines of the COVID-19 pandemic response. It was the second such operation this month. It included a direct path over Cloquet just after noon. The planes flew low due to cloud cover and were easily visible from the ground and, in one case, for workers on the roof of Community Memorial Hospital.

The aircraft were F-16 Fighting Falcon and C-130 Hercules aircraft from the Minnesota National Guard's 148th Fighter Wing out of Duluth and the 133rd Airlift Wing o...