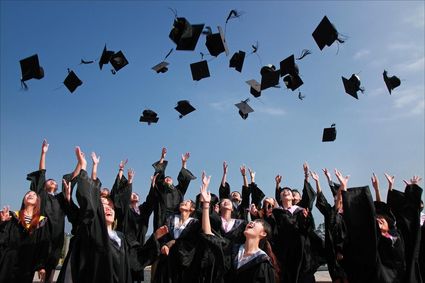 High schools in Carlton County are creating modified graduation ceremonies in the next two week. Most involve participants sitting in cars.

In short, schools, colleges and universities are being asked to host virtual graduation ceremonies people can watch from home. But many schools are attempting to do more than that by offering a more participatory approach for seniors.

Cloquet's plans for a drive-in-style movie of seniors receiving their diplomas will be met with strict guidelines at the Cloquet Business Park Friday night, May 22.

Events such as car parades or parking lot ceremonies are not recommended by state officials. But, if districts insist, participants can't walk to the ceremony or participate outside of vehicles.

Windows need to be rolled up if parked next to another vehicle; vehicles should be parked 6 feet apart if windows are rolled down. Events must also be brief, and no objects can be passed physically between cars.

The Cloquet ceremony is by invitation only, basically limited to seniors and their family members. Cars will be screened as they enter and police will be on hand to make sure social distancing is observed. The school expects about 200 cars. Folks at home can watch the graduation movie on YouTube simultaneously or listen on WKLK radio.

The state is aware of plans like those in Cloquet, but insists schools and colleges host virtual graduation ceremonies people can watch from home. The guidelines said schools are not allowed to host the large, in-person gatherings that traditionally have been held on football fields or in stadiums. Indoor ceremonies are also prohibited.

"Right now, we are definitely saying that the safest way to observe graduation and commencement is for everyone to stay home and to create a virtual ceremony for everyone with equity and access in mind," Ricker said.

Graduation ceremonies will take place as scheduled in Carlton May 22, but won't look like anything people have seen before due to the pandemic restrictions. Parents have clamored for a plan in the past month and this week the district was finalizing what it might be. It won't involve what some parents have called for - any kind of group gatherings - superintendent Gwen Carman said.

Instead, the latest plan calls for a virtual ceremony aired online and on the radio at 1 p.m. Friday, featuring speeches from students and the reading of graduates' names. After that, students will be allowed to drive to the school in slotted times to pick up diplomas, cross an outdoor stage near the school, have a formal picture taken, and celebrate with family members as they choose.

Students would also be encouraged to parade around town with wellwishers expected along streets.

"It's very difficult," Carman said of seniors not having a traditional ceremony. She was also speaking about trying to appease everyone with an event that will be meaningful despite the limitations.

State guidelines for graduation ceremonies were released late last week, and gatherings at schools or outdoor areas are not being allowed. It's all about honoring students while keeping people healthy, Carman said.

The diploma distribution could take up to four hours to complete with proper social distancing in practice, Carman said. There are just more than 40 students expected to graduate next week.

The district was continuing to take ideas from parents under the guidance of the state. Carman echoed the state education commissioner regarding the spread of the COVID-19 virus. It "loves group gatherings," she said. Any deviation from health guidelines would put lives and the district at risk, she said.

She said it would be difficult to keep people in their cars for any type of drive-in ceremony.

Despite warnings to stay in cars during the Monday night vigils under the football field lights, people have left cars and gathered, Carman said.

Priority is given to Graduates and their immediate (household) families. All attendees must arrive in a vehicle and stay in their vehicle the whole time. The entire ceremony will be broadcast live on WMOZ 106.9 FM. Or live stream it on: http://www.northwoodsradio.com (Audio only)

Graduation will start and conclude with a “Graduate Parade” through the city of Cromwell led by the Volunteer Fire and Ambulance Crew. At the conclusion of the ceremony a “recessional” parade will take place through town and conclude at the Pavilion. Cars will disperse from there, no congregating will be allowed.

The Fond du Lac Ojibwe School is also planning a drive-thru style ceremony on Friday, May 22. The Pine Knot News did not know a time for the ceremony yet.

Ceremonies in Esko and Wrenshall are scheduled for May 29.

Esko is doing a "car graduation," superintendent Aaron Fischer said. Students and families will park in the school parking lot as WKLK broadcasts a ceremony with student speeches. It will also air on Facebook Live.

Afterward, seniors will drive into the turnaround in front of the school to receive a diploma and have a picture taken. "After receiving their diploma they will go back into their car and will travel in a parade type situation around the town," Fischer said.

Wrenshall will actually have a ceremony with its 24 graduates that family members can watch from cars, superintendent Kim Belcastro said. Each family is allowed two cars in the school lot for the 4 p.m. event May 29. The seniors will be wearing masks and gloves along with their caps and gowns and will be able to walk up to an area to pick up diplomas. Belcastro said the ceremony will take about a half-hour.

Graduation speeches are being posted on the school website. WKLK will broadcast the ceremony, and it will also be posted live on the district Facebook page.

"It will be very different but certainly, hopefully, memorable," Belcastro said.