About 14 years ago, Kate Isles gave her partner in life and music, Bill Isles, some direction while they were driving in St. Cloud. "Don't go down by the bridge," Bill recalls Kate saying. "(And) I just bellowed out 'Stay up high on the ridge.'"

And that was the innocuous lyrical beginning of what became the song "Flood Waters," released on an album the couple produced in 2011. It became an audience favorite for the musical duo from Duluth that has a cabin and studio on Hay Lake in Carlton County.

"It has many messages," Bill Isles said of the song. Most often, it's about "respite and comfort," he said.

The song has endured. This week, a cover version of it was released in a video online. It features 21 musicians from the region, many from Carlton County. It was produced by Carlton's Timothy Soden-Groves, who has been promoting online music performance for much of the past two months of the COVID-19 pandemic.

If music can provide a metaphor for how people are feeling - or perhaps wishing to feel - during a difficult time, the "Song From the North Country" project delivered. "Flood Waters" starts with single voices and instruments, then slowly brings in more sound and musicians. They sing from outdoors, near water, and in studios. The song swells, and then breaks marvelously with instrumentals from violin and guitar by Lauren Cooper and Nick Muska followed by a duet from Carlton's country music legend Don Brown and Mahtowa's folk and Americana virtuoso Colleen Myhre. It's a twined moment where one can feel the healing power of music even in an age of social distancing.

And that is part of Soden-Groves' point. He said there are just so many musicians out of work and out of touch. "They're missing gigs and they're missing connections," he said, "with the audience and with fellow musicians."

Soden-Groves had seen similar projects online, namely "Playing For Change," which involves musicians from across the world teaming up to play songs for audiences eager for entertainment while stuck at home.

Soden-Groves sent out a batch of emails to area musicians and got a "great response."

They did some rank-choice voting on a song to play and "Flood Waters" came out on top. It was important to use an original song from local writers, he said.

Some tracking and recording information went out, and a few Zoom meetings were held. Some used professional equipment from home studios, others went as simple as a smartphone for recording.

Soden-Groves knew he was in the right groove at the first virtual meeting among the artists. "It was like a party," he said. "It was the most fun I've ever had on a Zoom call."

"I'm a dinosaur," Brown said flatly this week after the completed video started making its way to smartphones and computers across the area. Soden-Groves came out to help him at his home studio with the technical aspects. "He walked me through it. It came out great."

"They really captured the vision of what we wanted it to be," Soden-Groves said.

Right after the arresting Brown and Myhre duet in "Flood Waters" - including bright sun popping through a window over Brown's shoulder in the video - comes the 17-year-old voice of Sydney Hansen. The contrast is once again metaphor.

"It's a fresh face, a pure voice," Soden-Groves said. "It's veterans passing the torch."

"It was fun to meet and see people," Brown said. "For us musicians, things have been pretty quiet."

Recording at home was new to Myhre. She said she was honored to be included despite a shoulder injury keeping her from playing the guitar. "It was challenging but the final product is so cool."

"It's a tight community," she said of her fellow musicians, but they rarely get to see each other or work together because they are playing gigs. For Myhre, outside of pandemic lockdown, music is a full-time job with three to five shows a week. "Just to hook up with other musicians was super fun."

Soden-Groves gets a lot of credit for making all the disparate parts come together. The musicians laid down tracks of vocals and instruments, along with the video. Soden-Groves had to stitch it all together. It was a nearly two-month long project.

"It came together in a serendipitous way," he said. Like that sun coming into Brown's studio as he sang "the sun is breaking through the clouds."

"You couldn't ask for a better moment," Soden-Groves said.

Brown laughs when reminded of the producer's awe with the sunburst. He's not so sure about it but thinks Soden-Groves knows his stuff. Brown found the song and video to be "professional. I love it. I think it's great."

Soden-Groves was happy to work in Shane Nelson's whistling and other artistic flairs.

"They took creative license with some parts," he said. "It was wonderful and things sorted themselves out well."

Bill Isles said the video of his and Kate's song is inspiring them to look into making videos themselves. "We couldn't believe how it turned out," he said. "They nailed it."

"There will be a future," Soden-Groves said of the chance for more projects down the line.

Myhre certainly hopes so. "I wake up with 'Flood Waters' in my brain," she said. "Down the road, I'd love to be part of it again."

A host of local talent 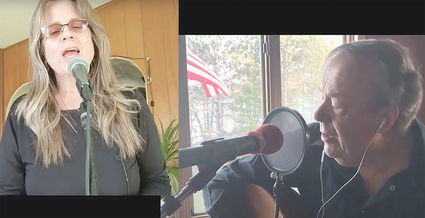 Bill and Kate Isles wrote the song "Flood Waters" that is featured in the online video project called "Song From the North Country." The Isles have a "musical retreat" at their cabin on Hay Lake in Carlton County. Other players from the county include Mahtowa's Colleen Myhre, Carlton's Don Brown, Esko's Kelly Smith, and Carlton's Diane and Timothy Soden-Groves. The other musicians from the region who are featured are Kim Curtis Monson, Dan Munson, Shane Nelson, Mark Anderson, Don Schraufnagel, Les and Beth Hazelton, Lauren Cooper, Nick Muska, Leslie Black, Jason Wussow, Sydney Hansen, Carl Zoretich and Arlene Anderson. The song and video were produced by Timothy Soden-Groves with assistance from Leslie Black.