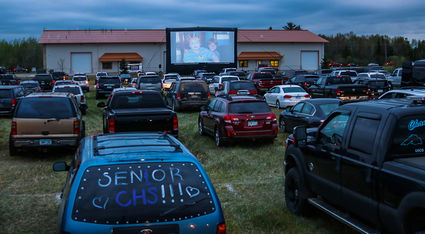 Cars started lining up at 8 p.m. Friday night at the Cloquet Business Park on Highway 33 North while a continuous loop of pictures and music featuring Cloquet High School graduates from the start of their educational careers kept people entertained until a graduation movie began at 9 p.m.

One thing is certain: the Class of 2020 will have lots of stories to tell future generations about their final school days.

Last Friday marked the beginning of the high school graduation season with three ceremonies - for Carlton, Cromwell-Wright and Cloquet graduates - each one organized differently but taking into account the COVID-19 pandemic and state guidelines to avoid large gatherings and maintain social distancing.

In Cloquet it was a true drive-in movie experience.

Cars started lining up at 8 p.m. Friday night at the Cloquet Business Park on Highway 33 North, while a continuous loop of pictures and music featuring graduates from the start of their educational careers kept people entertained until the graduation movie began at 9 p.m.

All of the Cloquet graduates were videotaped in advance walking across the stage as Battaglia called off their names. Each of the grads picked up their diploma and then paused for a picture to record their accomplishments. Everything was recorded and made into a movie, including the senior slide show and various commencement speakers.

The Cloquet ceremonies were also streamed on YouTube - allowing people at home to also watch and hear the ceremony, which was mostly limited to one car each for students and family - and broadcast on WKLK.

Although it was very different from a traditional graduation ceremony, Battaglia said he thought the movie and the event served its purpose.

"I think it helped with some kind of closure," he said. "They missed a lot of their regular events: graduation, senior field trips, different banquets, stuff like that. This was an event and it was unique to them - no one else got that. So they missed out on some stuff, but they got something else. It was kind of cool. And the video will be around forever."

Battaglia said folks remained inside their cars throughout the program as requested.

"That was my biggest fear, kids going rogue," the principal said.

So far, all the feedback has been positive, he said at Tuesday's Cloquet school board meeting.

"We also really need to give credit to the senior class advisers, Brenda Gigliotti and Shelley Robideaux," Battaglia said.

"They did a great job of spearheading the effort. Also a big thanks to the staff who helped out, the police and fire departments and the city of Cloquet for letting us use the industrial park as well. It was a great night."

Carlton held a two-part event at 1 and 3 p.m., that combined both live streaming of speeches earlier in the day and a live parking lot event later Friday. Carlton superintendent Gwen Carmen acted as master of ceremonies. The earlier event, held in the large gym at the high school, featured three student speakers along with a recorded message from interim principal Warren Peterson. The event was broadcast on WKLK-FM and carried live on Facebook.

The actual graduation ceremonies moved outside onto a long stage in the back parking lot of the high school at 3 p.m., where seniors and their parents parked and listened along on the radio or loudspeaker as each graduate was announced. The students approached the stage individually to pick up their diploma which was laid out on a table. Pictures of the grads were then taken by professional photographer Alan Johnson.

"I was very pleased with how things worked out as we wanted to honor and celebrate with the graduates, while also following MDE guidance," Carmen said, adding there were many details to figure out and changes along the way. She said the partnership with WKLK was much appreciated.

"One of my most favorite moments was hearing "And now we will go live to Carlton High School ...!" Carmen said. "The honking of horns instead of applause was awesome. I have received many, many thank-yous but it truly took the work of many staff and parents to make it happen."

Following the ceremony, the graduates were led in a parade by the Carlton fire department from the high school to the parking lot of the Four Seasons rec center. Supporters lined the route, including chemistry teacher Tracy Bockbrader and her husband, Rollie Bockbrader. The Carlton teacher was holding a sign depicting a beaker, which read "I'm not overreacting, you're graduated!"

Cromwell-Wright opted for a later ceremony because their ceremony included both video and in-person elements.

Principal/superintendent Nathan Libbon directed the program in Cromwell, which began at 8:30 p.m. Seniors were met by a cavalcade of emergency vehicles with lights flashing and led from the pavilion at the eastern edge of town, through town, and north to Villa Vista before finally being led to the high school parking lot where an outdoor ceremony took place.

WMOZ-FM's Jake Kachinske was on hand to broadcast the event over the radio as parents and students listened in their vehicles. Libbon spoke live at the event, and recorded speeches by students and others appeared on an outdoor screen that could be seen from the parking lot. As each graduate was announced, Libbon walked to the individual vehicle and presented the graduate with their diploma. Following the ceremony, the grads were escorted out of the parking lot for their own parade through town.

"I can't say enough about the amazing effort of our staff to plan and put this event together. Our focus was always to honor our seniors, and provide the best and most memorable graduation ceremony possible, under the circumstances," Libbon said. "Planning this event certainly took more time and effort than the typical graduation ceremony. However, I think that I can speak for everyone involved when I say it was well worth it if we were able to help make up for, in some small way, the many things our seniors have missed out on in the past several months."

Wrenshall, Esko and Barnum are holding graduation ceremonies in their school parking lots on May 29, with Wrenshall starting at 4 p.m., Barnum at 6 p.m. and Esko at 7 p.m. Moose Lake offered students time for private outdoor diploma ceremonies on May 24.