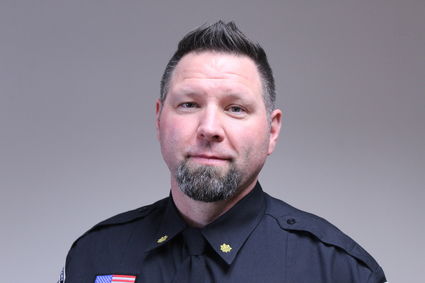 Derek Randall had been the interim chief of the Cloquet Police Department since September. On Tuesday he was chosen by the city council to lead the department permanently.

After months of searching and almost an entire day of interviews, Cloquet has a new, yet familiar, police chief.

A panel of nine community members interviewed the three finalist candidates Tuesday morning, then the council conducted interviews via teleconference in the afternoon. Candidates included Troy Bacon, police chief in Franklin, Indiana, Eric Klang, the police chief in Pequot Lakes, Minnesota, and Randall, who has been interim chief of police in Cloquet for more than eight months.

Following the interviews and an update on the citizen feedback from consultant Sharon Klumpp, councilors discussed their top candidates, with six of seven voting for Randall and/or Bacon as their top 2 candidates. More favored Randall because he was the internal candidate. Steve Langley ranked Klang first, Bacon second and Randall third.

"In the brief time since I've come here, I've seen a great deal of Derek Randall's ability to work through difficult times, including a homicide and COVID-19," Peterson said, also pointing out that Randall is well-known and respected in the community, and his hire would mean a quicker adjustment period for the police department. Additionally, he said, Randall already has the respect of the officers, even if they don't always agree.

"Bacon is phenomenal, but we have a great candidate in front of us," Peterson said. "In my mind, Derek Randall is the choice."

Randall said his phone "blew up" after the council vote. He was pleased to get the job and the vote of confidence from the council, he said.

"We know that there are some challenges ahead, but I think we're in a good place," he told the Pine Knot News Wednesday. "I take ownership in our organization here and I want to better it. I think over the last eight or nine months, we've really righted an upside- down ship. The goal over the next few years is to really hone in on the direction that we're going."

Randall has worked in Cloquet for 19 years. After working as a deputy in South Dakota and then Wright County near St. Cloud from 1997 to 2001, he started in Cloquet in 2001 as a patrol officer. He was a detective from 2003 to 2015, then investigative commander 2015 to 2019. He has a bachelor's degree in criminal justice and a master's degree from the public safety executive leadership program at St. Cloud State University.

He has deep roots in the community, as a police officer and citizen, coach, teacher and parent, Randall said. He and his wife, Jen, have two children, Ezra and Eli.

In his council interview, Randall said he originally thought he would move to Grand Rapids to live near family, as he spent a lot of time there with his grandparents growing up. But this is home now, he said.

"I came here in 2001 when my parents were planning to move to Grand Rapids. A few years later, 11 Randalls followed, and they're all active members of the community now," he said. "This is my home."

His mother is an enrolled member of the White Earth Band, and his grandfather was a sheriff in Itasca County for 16 years, so his early life also seems to have prepared him for this particular job. Randall is currently studying Ojibwe at FDLTCC, where he is also a part-time instructor in the law enforcement program there, he told the council.

He tells a story about his grandfather, "a big Danish fella" who studied Ojibwe with his Native American wife, arresting two men who had gotten into an altercation at a powwow.

"They were speaking in Ojibwe about him at his squad car, and suddenly my grandfather spoke out in Ojibwe to both of them," Randall said. "The look on their faces was incredible. But I also think it made him closer to a lot of the people he served and gained him respect."

Ward 4 councilor Kerry Kolodge, a retired Duluth police officer, said recent events made him think Randall was the best candidate for this time, referring to the death of George Floyd in Minneapolis after a police officer kneeled on his neck for nearly nine minutes.

"Officers can't just be thought of as machines, they need to have some humanity," Kolodge said. "I see more awareness of that (from) Derek Randall."

When Ward 1 councilor Bun Carlson motioned to hire Randall with only about five minutes left before the special council meeting needed to end, things got a little harried as some councilors wanted more time to discuss. Although he had stated a preference for Randall, Kolodge wondered if the council was overlooking the fact that Bacon's qualifications had aligned with the city's requirements, while Randall's had not.

Klumpp, a director with consulting company Baker Tilly, said "no," pointing out that the two were pretty comparable and Bacon has been a chief longer. Klumpp also said community members found Randall a strong candidate who had integrity and vision and who "displays servant leadership."

"I feel we're not hiring the most qualified candidate again. It was a bad move last time, and I think it's a bad move again," he said.

Langley was presumably referring to Jeff Palmer's appointment as police chief in October 2017. Then a sergeant, Palmer had been appointed interim chief during the same closed council meeting when the previous chief was placed on administrative leave (following a vote of no confidence by members of the local police union).

Neither Randall nor Ferrell, both commanders at the time, were given the opportunity to serve as interim chief even though they were next in line on the department's organizational chart. The city never advertised the police chief position when Palmer was later given the position on a permanent basis. At that time, Langley joined then mayor and retired Cloquet police officer Dave Hallback and councilors Jeff Rock and Adam Bailey in supporting Palmer's appointment.

Fast forward 2.5 years, and Randall has been interim police chief more than eight months, ever since previous interim police chief and fellow commander Carey Farrell went on leave in September. For his part, Ferrell had been acting police chief since Palmer went on voluntary paid leave in April 2019. Randall got little notice that he was going to be the only administrator left.

It's a changed department from just a few years ago. Only one officer has more tenure than Randall, as many others have left. Only three officers have 15 years or more of experience and the rest of the staff have been there five years or less.

"This is the time to lay out expectations," he said, "and be the coaches we need to be, and direct the younger staff."

But he wants the journey forward to be a collaborative effort.

"I've told the entire staff multiple times that we will not be successful unless we have total buy-in and we're all in the same mindset of serving and seeking justice," Randall said Wednesday. "As long as we have that integrity component, I'm fine with dissenting opinions. I think we learn from those. But at the end of the day, we all need to agree on what our purpose is as police officers."