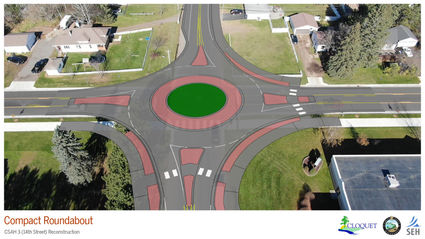 Plans for reconstruction on 14th Street in Cloquet include a roundabout at Washington Avenue.

Planning for an upgraded 14th Street corridor includes a new roundabout along with a wide multi-use pathway along the east side of the road from Washington Avenue to Cloquet Avenue.

About 20 people tuned in to the virtual public input meeting on tablets, computers and phones to learn more about the upgrade last week.

The June 17 meeting included a presentation by the engineering firm SEH led by Matt Bolf and Dan Hinzmann. About 30 percent of the work on an engineering plan has been completed, based on public input from a previous meeting.

Also known as County State Aid Highway 3, the 14th Street rebuild will be bid as a county construction project this fall. It is an expected two-year project divided into three zones.

Zone 1 is from Tall Pines to the Washington Avenue intersection and will be milled and overlaid. Curb and gutter work has been done in the past. Overhead utility lines will remain.

The intersection of 14th Street and Washington Avenue will become a roundabout large enough to handle traffic up to and including semi-trailer traffic. Some property of the adjoining landowners will be lost.

Zone 2 runs from Washington Avenue to Prospect Avenue with two 11-foot driving lanes and parking on the west side only. There will be no sidewalk on the west side, but a concrete 10-foot multi-use pathway will run the whole length on the east side. The pathway will be wide enough to allow pedestrian traffic to meet easily and also allow for bike (and skateboard) use as the pathway will go past Athletic Park and the skatepark, as well as the Cloquet Public Library and Garfield School.

Zone 3 plans from Prospect Avenue to Cloquet Avenue include a 6-foot sidewalk on the west side of the rebuild, a 10-foot pathway on the east side, and parking on both sides. This zone has some challenges with powerline poles in the construction area and fences and buildings on or close to the street upgrade.

From Washington Avenue to Cloquet Avenue, all hydrants, waterlines and storm sewers will be replaced.

Because 14th Avenue is a county road, state aid funding will be used for the roadway rebuild and the city of Cloquet will fund the utility upgrades. Meetings continue with affected businesses and local property owners. The June 17 presentation was filmed and is available for viewing on both the Carlton County and Cloquet City websites. A final public input hearing will be held closer to fall.