Police conduct on mind of many 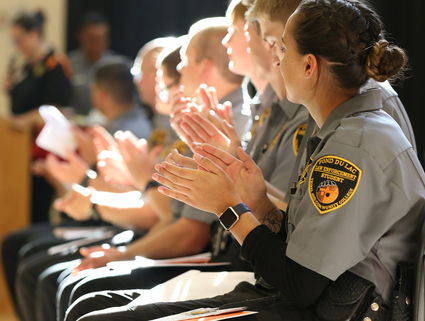 The minute that former Cloquet police chief Wade Lamirande saw the video of George Floyd dying under the knee of a white police officer in Minneapolis, he knew it would blow up in a big way, with good reason.

It was the antithesis of everything they teach in the law enforcement program at Fond du Lac Tribal and Community College, where Lamirande is the program coordinator.

He makes that clear in the very first interview with a prospective law enforcement student.

The reaction to Floyd's death was swift, with protests starting in Minneapolis and spreading across the country and the world. Protestors and politicians demanded prosecution for the police officers involved in Floyd's killing, and made the world acknowledge that being a black person in police custody can be life threatening simply because of the color of their skin in America.

Now legislators are stepping in, responding to calls to "defund the police" and announcements that policing in America is "broken."

The idea of "defunding the police" has not caught fire locally at this point. Newly appointed Cloquet police chief Derek Randall said the Cloquet police department has been understaffed for more than a year, but not deliberately.

But both Randall and Lamirande agree there is room for improvement and more change.

Lamirande likened the current reactions to those to a school shooting, after which people say "take away everything sharp." But once the emotion runs out, nothing changes.

"I truly hope that this isn't another one of those examples where a call for change has not been heeded. I think this is a tremendous opportunity for law enforcement and society to make changes."

At the same time, they say that policing in America has been evolving over the years. The old stereotype of police officers being largely white males with military leanings has been fading away. Training methods have changed. Things need to keep evolving, Randall said, pointing out that Minneapolis still trained its officers to use chokeholds, something that Cloquet doesn't allow.

"Over the years there's been an increased push for how we use force, how we apply deescalation techniques. It used to be that many agencies just had a force continuum that said, if someone is presenting a certain level of force, you can automatically respond with one step higher," Randall said, noting that he published the CPD use of force policy on Facebook after Floyd's death. "Now we use objective reasonableness (whether or not a reasonable officer on the scene, faced with the same circumstances, would use the same physical force)."

The discussion of how to restructure the criminal justice system in our country needs to involve many people in all levels of the profession and society, Randall said.

It should be both a national discussion and a local one, he thinks. There are some issues that can be solved only nationally, such as excessive union power, and others that are best solved with local knowledge.

"If you're going to have a healthy community, it's specific to that community and I think that involves community members, along with everybody involved in the criminal justice system, attorneys, probation, social workers, judges, but also health care providers, mental health providers and school officials," he said, adding that being able to build positive relationships in the schools with students before they might go down the wrong path has been huge in Cloquet, where they had and again have a school resource officer during the school year.

Criminal justice also has been evolving, he said, pointing to the swing toward restorative justice versus punitive or retributive measures that don't really address the root of the problem.

"I think it's a fallacy that people think that when we arrest drug dealers or people using drugs and we take them to jail, we presume that they somehow come out rehabilitated," he said. "Other options like a drug treatment court may not seem like the best option to someone new to the idea, but when you look at the research behind it, it's at least as or more effective and cheaper (than incarceration).

Neither Lamirande nor Randall agree with the idea that the world is better off without police.

"I don't need a police department as a deterrent but, being in this field, I know that evil lives," Lamirande said. "People are going to break laws, take advantage of opportunities to commit crimes, to take from other people and worse - to rape and assault and murder - and society has always had and needs to have that structure."

Instead of defunding, Randall suggested greater funding might be needed in specific areas, suggesting more emphasis on areas related to use of force, such as deescalation and crisis intervention techniques.

"I think it all ties into the problem-oriented style of policing where we try to get to the root of it, and try to restore things and bring them back to wholeness," Randall said.

Other ideas brought forth by Randall and Lamirande in the conversation about changes that would better policing in America included finding a balance of power between police unions and police administration, creating a national database for police officers who have displayed excessive use of force, increasing diversity in the force, and making sure that officers have a service mentality.

The culture of individual police departments can be helpful or detrimental.

Lamirande said his students will make the ethical choice every time in class. But then place them into a police department where they want and need to be accepted and supported by their peers, and things can change.

"Depending on the department you work for, it can be culture rather than the manual that's controlling the actions of the officers," Lamirande said. "It's that peer-to-peer accountability piece and that's where you have to get the right people doing the job. We have to hold each other accountable."

It can be difficult to get rid of bad cops, he acknowledged. Even officers who have committed egregious behaviors might get a second chance if an arbitration decision goes their way, or a city council isn't committed to holding officers accountable.

"Many times, even when they have a good case against an officer, instead of trying to get rid of a police officer, many departments will tell them to resign, or they'll be fired," he said. "They resign and they basically leave in good standing with their POST (Peace Officer Standards and Training) license intact and just go down the road."

Still, even while acknowledging the issues, neither the old chief nor the new chief would choose a different career path.

Policing remains a noble profession, Lamirande said. "I loved serving my community, the town that I grew up in. My career was tremendous - I loved it. And I tell the students, if I was still 20 years old again, I'd do it all over."

He's worried that the current atmosphere could mean fewer law enforcement students, although on the flip side, he thinks some may be drawn to the field because they want to be part of the change.

He tells his students that they can make a difference in this profession, good or bad. The choice is theirs.