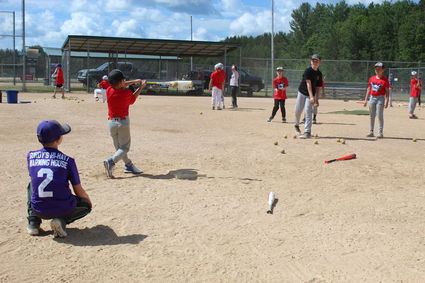 Cloquet's Braun Park was a busy place this week, as baseball players ages 6-14 attended the Northland Baseball Camp from morning to afternoon Monday through Thursday. Here Kadan Willis, 11, pitches to hitter Bryson Lamb, 10, during a drill Wednesday morning that involved numerous small groups of 10- and 11-year-old kids practicing their baseball skills under the watchful eye of coach Justin Harriman. Harriman said they had a better turnout than expected for the camp.

For some, the slow opening of youth sports in Minnesota during the COVID-19 pandemic comes too late. For others, it offers a ray of hope for action outside of practice.

State health officials announced this week that youth sports games can start in the coming weeks. Outdoor sports could return to games and scrimmages starting Wednesday and indoor sports July 1 or later under the Minnesota Department of Health's recommended guidance.

Cloquet's Arrowhead Fastpitch League canceled the summer schedule earlier this month. It was decided that the measures it had to put in place weren't worth what would become a 4-week season. Players will continue to practice through June and play some scrimmage games in July among more practices.

Tee-ball for the younger set was also canceled. In Esko, the school board in May canceled all district-sponsored youth activities for the summer.

Safety measures will continue, including caution tape directing where people can watch games and constant reminders to players to follow social distancing protocols.

Older kids get it, Eckenberg said, but they and younger players still have to be told, "don't touch each other," he said. As practices started last week, many players hadn't seen each other in months.

Among the recommendations, the state calls on players to:

Try to use "dedicated personal equipment" such as bats, mitts and rackets

Find new ways to show sportsmanship, including "tip your hats instead of handshakes."

"In the end, everyone has to make their own decisions about what level of risk they are willing to accept," health commissioner Jan Malcolm said.

Dustin Randall, who coaches girls soccer in Cloquet, said things will go slow until after the Fourth of July break. Teams in most outdoor sports across the state were allowed to start limited practices in early June.

"We're going slow on things," he said. "We'll take the break and then see after that."

He agrees with state officials who said that the decision on having kids out on the field will ultimately rest with how families want to deal with the health risks.

"Individual families have different levels they are comfortable with," Randall said.

"Some families, especially those with members who face an elevated risk of severe illness, may choose not to participate," Malcolm said. "That is perfectly OK, and everyone needs to respect that decision when a family or a player makes it."

State officials also said the Minnesota Department of Education is working with the Minnesota State High School League to develop activities and sports guidance for schools for the fall sports season.

Eckenberg said summer play under the cloud of the pandemic has had one bright development. He's advocated in the past that players gather in smaller pods to learn diamond skills instead of just putting a team out on the field. "It kind of helps," he said, "because more players get more reps. Thirty or 40 kids can get some work in at the same time."