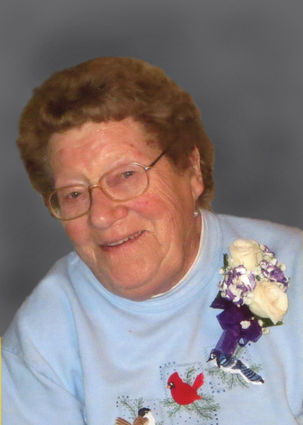 Margaret graduated from Aitkin High School in 1945. On July 4, 1946, Margaret married Robert Schmidt in Aitkin. They made their home in Cloquet until 1964, when they moved to Mahtowa where they farmed and logged together. In 1964, Margaret started working at the Moose Lake State Hospital, serving as a psychiatric technician until retiring in 1987.

While in Cloquet, Margaret was a 4-H leader. She was a member of Holy Angels Catholic Church. She enjoyed sewing, camping and traveling. She was also quite the woodworker. Using her father-in-law’s tools and saws, she made many projects including mobiles and planters. Her favorite project as of late was sewing tooth fairy pillows. If you needed something made, Margaret could always figure how to make it. Even though she wasn’t actively farming, her job was to watch the cows on the “Cow Cam.” Her greatest joy came from spending time with and doing things for her family.

Margaret was preceded in death by her husband, Robert; sisters, Betty Huber and Minnie Micklewright; and granddaughter Megan Schmidt.

Visitation: 10 a.m. until the 11 a.m. Mass of Christian Burial Monday, July 13 in Holy Angels Catholic Church in Moose Lake. Burial will be in Mount Salem Cemetery in Mahtowa. Masks are requested. Letters and cards of condolence may be sent to the family care of the Atkins Northland Funeral Home, 801 14th St., Cloquet MN 55720. To sign the guest book and offer an online tribute, see http://www.atkinsnorthlandfuneralhome.com