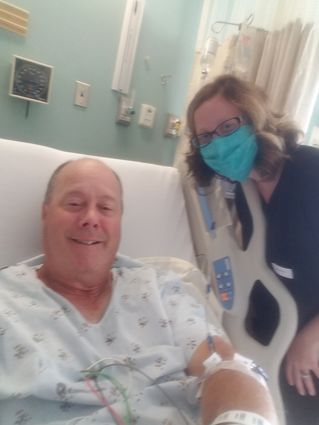 The morning of June 21, Father's Day, broke hot and humid in the Twin Cities. I was visiting my daughter and son-in-law and three of my grandsons. My work quarantine was over and, for the first time in three months, I was able to see my grandsons and play ball with them. Little did I know it came close to being the last time.

After a quick breakfast, we all headed to a ballpark where we played catch, hit grounders and I pitched to them as we finally got a little normalcy back in our lives. The first signs that something might have been wrong started as we wrapped up our morning practice session. I seemed to be having a little problem catching my breath and there was a heaviness to my chest. I assumed it was because of the hot weather and blew it off.

We went back to the house and then I took off for the two-hour drive home. Things got better as the air conditioning hummed and I forgot about the episode.

I got home in the early afternoon and took a quick nap. After waking up, I noticed we had some small ants moving across the hardwood floor in our living room and I headed to L&M to pick up some ant traps. By the time I got there, they had closed, so I headed to Walmart.

I walked to the back of the store where they kept the ant traps and noticed a small pain in my chest. I got the traps and started walking toward the checkout area and the pain started to intensify. After paying for my items, I headed out the door with the pain now reaching the point that I knew something was wrong. When I got in my truck I reached for my cell phone and that is when I realized that my phone was at home. In a panic, I spent the short drive home thinking, stubbornly, that the pain would subside with the air conditioner on in the truck. It did not. It continued. When I pulled into the driveway it was all I could do to get out of the truck without falling over. Had my cell phone been with me in my truck, I would have pulled over and called 911. I was in a complete panic by this point. My only goal was to somehow, right or wrong, get home to call the ambulance.

I am not sure how, but I managed to get into the house where my wife had dinner waiting. Imagine her shock when I said, "Call the ambulance right now - I think I am having a heart attack."

She complied and then I sat down in a chair in the living room, still in a panic. My son-in-law, Travis Gustafson, is with the Cloquet Area Fire District and happened to be driving by and heard the call come in. He was at our home in a matter of seconds. After my wife, he was my second guardian angel of this whole crazy process.

Minutes later an ambulance pulled up and three quality young men put me on a heart monitor and one said it was probably a good idea to head to Essentia in Duluth based on what the monitor was showing them. He said it wasn't "screaming" heart attack, but there were enough signs that said "we need to get you there now."

Off we went to Duluth with a bit of nitroglycerin under my tongue. Things were a bit better.

At Essentia I was put on monitors and drips and had all kinds of tubes hanging out of me and eventually they decided I needed an angiogram to put in a couple of stents.

That process happened two days later, at 8 p.m. on June 23. After five minutes on the table, the surgeon leaned over and said "We're done here" and then proceeded to tell me I would need a quadruple bypass.

What a punch to the gut.

At that point I was brought to the recovery area, where I lay there thinking "Oh my God, this is real."

That's when my third guardian angel - in the form of Cloquet native Monica Smith, now Monica DeCaro - walked in and asked how I was doing. A former softball player of mine, she knew that I was having the angio surgery that night and wanted to see how it had gone.

"They just told me I need a quadruple bypass," I told her. She came over and said, "Kerry, do not worry. We will take care of you and everything will be fine. This is what we do and we are very good at it."

When they rolled me up to my hospital room a wave of emotion hit me. I was all alone because of COVID-19 protocols and now I was heading into a strange room, in a strange place, with no family. But just as they were turning my stretcher into my room, I heard a familiar voice. "Stop." It was my niece, Tiff Rodd, who also works at Essentia. She leaned over and said, "I love you," and gave me a card. She was my fourth guardian angel that night.

It would be three more days before I underwent the quadruple bypass. During that time, my wife, two daughters (Chelsey and Katie) and son (AJ) all spent countless hours visiting me to keep my spirits up. We talked with my grandkids via phone and their smiles gave me strength. When the eve of the surgery arrived, and visiting hours were over, I was alone in my room with my thoughts. A rush of negative emotions swept over me.

Then I prayed that God would get me through this process. Moments later, my phone rang. It was Bob Ames, a longtime friend who had been through a similar situation. He explained to me how things would be better when I came out of surgery and that I could do this. I needed that call and he was guardian angel No. 5.

Minutes later the phone rang again. It was Tom Cawcutt, who also had gone through bypass surgery. Guardian angel No. 6.

After lying in my bed a couple more hours waiting for sleep to hit, my phone rang one last time. Jim Hatch asked me how I was doing. I told him I was scared. He then quoted some scripture that pertained to putting my trust in God and how I needed to pray. He then prayed with me and I felt a huge weight off my chest. In minutes I drifted off to sleep. Guardian angel No. 7.

The morning of surgery arrived and I was awakened and prepped for surgery. I was then wheeled down to the operating room. The moment the doors to the operating room opened, my blood pressure soared and I panicked. People were moving everywhere. It reminded me of a scene from a movie. I asked the nurse to let me say a prayer before I moved onto the operating table. It was short and simple and basically said, "God give me a sign that I will be OK."

I told the nurse I was ready to slide onto the operating table and that's when I felt a hand on my shoulder. It was Liz Moreland, formerly known as Liz "Bug" Plante of Cloquet. She was my surgery tech that morning. She leaned over and said, "Don't worry Kerry, we will take care of you and everything will be OK. You will be fine." Then she was gone.

As I laid back, I relaxed and said to myself, I am ready for this now. She was guardian angel No. 8. When I woke up in the recovery room I felt peace. I knew I faced a long road of rehab, but I also knew the worst was behind me.

I was released just four days after surgery and headed home with my wife. In the days that followed I was able to get moving and walk a block down to one of the neighbors and enjoy some socially distanced company.

As of July 7, just 13 days after surgery, I had already started rehab at the Cloquet hospital under the watchful eye of Azur Coleman and the cardiac rehab department. They say in a month and a half, life will be back to normal and I will be able to resume all the activities I have done in the past.

In other words, I have been given a second chance. I plan to find a way to let others know what good can come from the worst of circumstances, to trust in friends and family and to try and live a full life. I also want to become better at walking so that I can actually beat the pregnant neighbor lady in a race.

Special thanks to the entire cardiac unit at Essentia, the Exercise Physiology and Cardiopulmonary Rehabilitation Department at Community Memorial Hospital, my family, all my friends and especially my staff at WKLK for their unwavering support during this time.