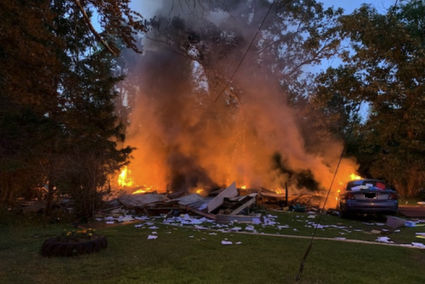 Carlton County Dispatch took a report of an explosion and structure fire at 4080 Korhonen Road at 8:53 p.m. Tuesday, July 14.

Two people were seriously injured Tuesday, July 14 when a furnace apparently blew up and mostly destroyed a home in Silver Township.

Carlton County Dispatch took a report of an explosion and structure fire at 4080 Korhonen Road at 8:53 p.m. Tuesday. The initial report indicated that a 75-year-old female victim had been injured and a second victim was trapped inside the basement. The 52-year-old female was able to get out of the basement before the Kettle River Fire Department arrived. She reported that when she turned on the furnace inside the residence, the residence exploded.

The victims are related, and suffered serious injuries from the explosion and fire. They were transported to Mercy Hospital in Moose Lake by ambulance and both were later airlifted to Essentia St. Mary's in Duluth. The victims' names and conditions were not known as the Pine Knot News went to press.

The cause of the explosion and fire is under investigation.