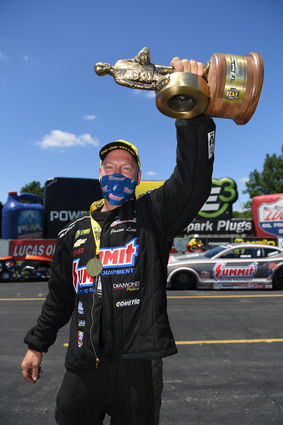 Three-time NHRA Pro Stock champion Jason Line, formerly of Wright and now based in North Carolina, will retire from driving after the 2020 drag racing season. He reached a goal last weekend with his 51st pro stock win at the NHRA Nationals in Indianapolis, Indiana.

Line has had a tremendous career, but this win in his 17th season was really special because it meant he has won at least once in every season of pro stock racing since he started in 2004. Line has the longest career season win streak of any active driver in the series.

"I wish I could see my dad's face right now because he's big into streaks and it was important to him that I win at least one race every year that I'm in pro stock, and we got it done," Line told Kevin McKenna, NHRA National Dragster senior editor.

During the final race in Indiana Sunday, July 12, Line defeated Jeg Coughlin Jr. in the final round by a cool 16-thousandths of a second, following a 6.658 second pass at 207.21 miles per hour.

Drag racing and high performance have always been a part of Line's life. His entire family races, including his parents, Lawrence and Maxine, his siblings, and their offspring.

In the early days of his career, Line won the 1993 NHRA Stock Eliminator divisional and national championships behind the wheel of a 1970 Buick Gran Sport. He drives the same car to this day in stock races whenever he gets a chance. Line joined KB Racing in 2003.

Lawrence said Jason used to talk about racing pro stock when he was in school, and kids didn't believe him. "But he did it," Lawrence said.

"We come from a poor family but we're very hardworking," Lawrence said. "Like his brothers and sisters, Jason worked very hard at what he does to get where he is. And he did it all with no money, just brains. They (the kids) are all talented. It's the wish of every parent, isn't it, to see their kids be successful?"

Line was appearing in his 104th career pro stock final last weekend. In a racing season interrupted by coronavirus, Line is in second place in the series standings after three races.

The next event on the schedule is the Heartland Nationals in Kansas, Aug. 21-23.

A change of pace

With NHRA celebrating 50 years of pro stock this year, and Line turning 50 and having 50 wins to his name, he felt that the numbers added up just right for retiring from behind the wheel of his Summit Racing Pro Stock Camaro. He has dubbed this final season of driving for Ken Black Racing the "Finish Line Tour."

Line will channel his fierce drive to win into building and tuning pro stock and sportsman-class race engines at the Ken Black Racing shop in Mooresville.

Line said he's enjoyed driving a pro stock car for Ken Black and Summit and stressed that he's not leaving racing - he's just going to be working for wins for KB Racing from a different kind of seat.