Trails are the star in this race 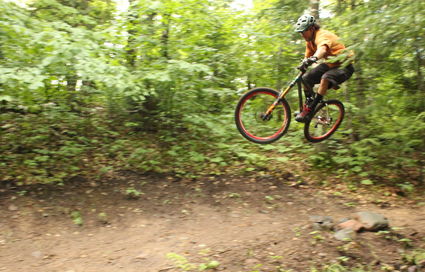 Cloquet's Tom Anderson gets some air during Saturday's Pine Valley Bike and Run race. Anderson said he's "just an old BMX biker" who likes to ride mountain bikes sometimes. He didn't do both laps of the race, but he did hit most of the jumps on the new section of trail. Bikers can choose between doing the jumps - which requires a certain skill level - or bypassing them on an alternative trail. Helmets are required.

There were more volunteers and media than racers at Saturday's Pine Valley Bike and Run event, but that's OK, said organizer Tim Krohn. The five bike racers didn't care either, nor did the two runners. It's all about building awareness of the new bike trails and other opportunities at the Cloquet park.

"The more publicity this park gets, the more it will grow," said biker Brendon Menze.

"I love the fact that Tim puts so much effort into getting the community involved in biking and winter snowshoeing, etc. out here," Anderson said. "He's a blessing."

"It's nice to see Cloquet get into this," Stark said. "[Mountain biking] is a great sport for every age group. It's good to see it grow."

The event was originally designed to use just the existing mountain bike trail, but since a mile of new trail was built in May, that loop was added. Another mile-and-a-half was due to be completed this month. Krohn said the newest trail is more than half done now, and goes under the ski jumps and across the old tubing hill before heading up and down through the woods. Its completion will bring the total to nearly 5 miles of mountain bike trails.

Anderson said the trail conditions were fantastic, despite thunderstorms the night before. "It's definitely an all-weather trail." 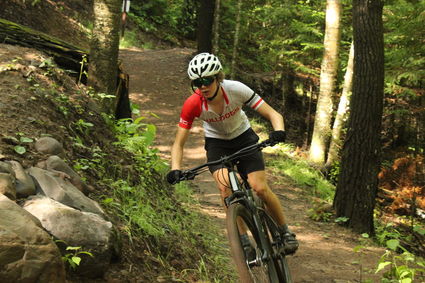 Jackson Willie, 15, of Texas races down the black diamond trail at Pine Valley during Saturday's races.

Krohn has been spearheading a drive to raise money to pay for the bike trail additions so the city wouldn't have to foot the bill for the project, which was originally estimated at $125,000 but will likely come in closer to $90,000. A Minnesota Coastal Program grant will match up to half the costs (up to $62,500). Krohn and fellow supporters raised approximately $30,000 more, including a $10,000 grant from Minnesota Energy and $5,000 each from Enbridge and an anonymous donor, plus $2,500 from Minnesota Power, $2,000 from Walmart and $1,500 from Sappi along with other smaller donations and funds raised from other Frozen Forester and Pine Valley races.

He showed supporters the new Snowdog groomer he purchased for volunteers to use to groom the bike trails for fat tire biking when the snow falls.

Krohn said he appreciated the coverage from TV, radio and two newspapers, and he is debating the fate of his Labor Day race since so few participants turned out for Saturday's event.