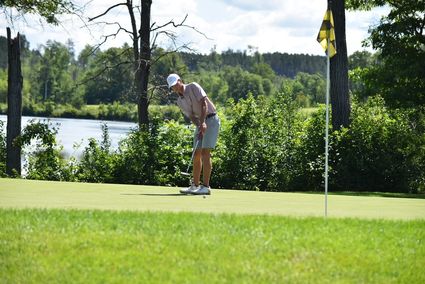 Despite having his high school golf season wiped out due to the coronavirus, this summer has been nothing short of a whirlwind for Cloquet-Esko-Carlton golfer Sam Baker. The senior played in the Minnesota State Junior Boys' Golf Championship at Pine to Palm Golf Course in Detroit Lakes Monday and Tuesday and finished in a tie for third place.

"I played well on Monday, but on Tuesday I struggled off the tee," Baker said. "It's pretty hard to win when you're playing a lot of punch outs off the fairway."

Baker has played in four tournaments this summer, and among those was a win at the Minnesota Junior PGA.

"I had a good second day at that tournament," Baker said. "I shot a 65 and finished with a 1-under par to win the tournament."

Baker was driving back to Cloquet from Detroit Lakes late Tuesday afternoon as and talked about his busy summer.

"I am not happy with the way I finished," Baker said of Tuesdays results. "I went there to win and third place is not what I wanted."

Baker opened play on Monday with a 67, which was good for second place after the first round. But a second round of 74 dropped him into the third-place tie. Not a bad finish for Baker when you consider there were more than 120 junior golfers playing in the tournament.

This summer Baker also golfed in the Minnesota State Open - which is open to all golfers, including pros - and the Minnesota Amateur Championship.

"I missed the cut in both of those tournaments," Baker said. "I had just come off winning the Junior PGA at Giants Ridge and I was not able to get practice time in, and you can't play at that level and expect to be sharp without practice time."

There is no rest for Baker as he will hit the road again this weekend when he heads to another tournament in South Dakota.