Falls sports turned inside out 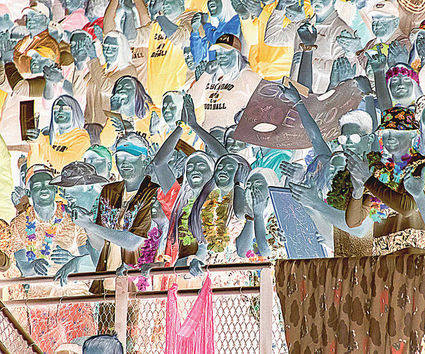 In a world where nothing has seemed normal since March, the hits keep on coming. This week, the Minnesota State High School League announced that football and volleyball will be played in the spring while other fall sports will come under strict Covid-19 pandemic safeguards.

The decision adds to apprehension about the opening of the school year while the virus lurks invisible across the country. Scenes like the crowd above at an Esko football game last fall are a distant memory. For more on the decision, keep reading:

Fall sports are a mixed bag

The Minnesota State High School League on Tuesday agreed to move high school football and volleyball to spring seasons this year while other fall sports maintain modified schedules in response to COVID-19.

The football and volleyball seasons will take place from March to May and spring sports will be pushed back to a May start. Practices will be allowed this fall with conditions.

The changes are designed to limit exposure of athletes, coaches and officials to the highly contagious respiratory disease. All sports will see limits on the number of competitions and how many teams can participate in any single event.

League director Mike Domin said he's concerned about the risks of managing sports during a pandemic, but also wants to bring some normalcy to schools.

"I really want fall sports. You know why I want that? Because that's the way it's always been. We're not used to anything different, ever,” he said.

Charles Adams III, head coach at North High School in Minneapolis, said his main priority is keeping his athletes engaged and stable in a crazy time.

Russ Reetz, activities director at Prior Lake High School, said schools will still need to be prepared to shut down programs if players become infected.

"We had positive cases and had to shut down. In fact, we had to shut down every sport that was inside a gym this summer — boys basketball, girls basketball and volleyball,” Reetz said. “So those things weigh heavily on me as we consider the best path for getting our kids the best possible experience.”

Social media reaction to the change in football was mixed with some angered by the shift and others heartened that there would be games in the spring to watch and play.

“Not the decision we were hoping for today,” the Coon Rapids High School football team said on Twitter, adding that players “will overcome this and be ready when the time comes.”

The league did not decide what to do about post-season tournaments and meets, which typically feature many teams and spectators.

Local reactions included both disappointment and acceptance that safety should come first.

When asked about how he felt toward the move to a new spring season, Cloquet quarterback junior Alec Turnbull said he was “disappointed, but happy that there will hopefully be a season, even though it’s pushed back. I’m hoping we are in school at least half the time,” he added.

Cloquet’s Morgan VanReese said she understood why the Minnesota State High School League made the decision it did.

“MSHSL made this decision to keep everyone safe, so I understand, but I’m sad because it’s my senior year. I haven’t heard much about what will happen with volleyball during the fall, but it sounds like we might still be able to have gym time so that’s better than nothing,” she said. “When Covid came to the U.S., I knew this would be our new reality so I prepared myself for whatever would become of my senior year. However, I’m concerned about what will happen to the spring sports, such as softball, which I also play, because it might be pushed to the summer. I am hoping we get to watch the football games in the spring, because I love being a part of our student section.”

South Ridge activities director Tony DeLeon is also the 7A Region rep at the Interscholastic Activities Administrators Association. He acknowledged feelings on both sides of the issue.

“The safety of the student athletes and my coaching staff comes first and foremost in any situation that may arise,” he said. “It's a continuation of disappointment from last spring, however the decision to move football/volleyball to spring is better than canceling the season altogether. Last spring's programs didn't have any opportunity to complete their season, fortunately the decision to move to spring will allow football/volleyball to complete their season.”

DeLeon said the changes will cause some scheduling issues with the reduction of games and teams allowed to compete during events, adding that the activities directors from each school will work together and develop schedules that best serve each program.

“We all want what's best for not only our student athletes but for all the programs in and around our conferences and regions,” he added.