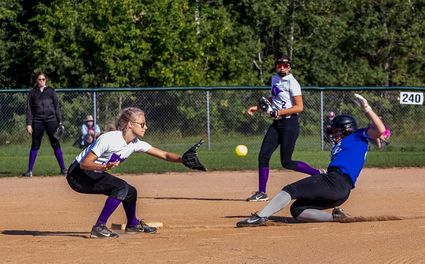 Breea Rasmussen of 218 Intensity attempts to tag out a runner coming into second base.

The opportunity to play softball this summer has been fleeting due to the COVID-19 pandemic. This past weekend Braun Park held its only softball tournament of this summer. The Wood City Classic featured nearly 20 teams in its first year.

"I called Jason Eckenberg, who is the president of the Cloquet Youth Baseball/Softball Association about a month ago and asked him if we could use the park to do a tournament which would replace the Ashley Abrahamson Tournament," said Esko youth coach Merle Kelley. "Some of our local teams have played hardly any ball at all this summer and we hoped this was a way to get in some games."

Kelley, Eckenberg and Cloquet youth softball coach Steve Martin combined their efforts and in a matter of days the tournament came together.

"Everyone was happy the girls got to play," said Eckenberg. "Most teams played at least five games over the two days."

A total of 19 teams registered for the tournament which was played in two age divisions, U-14 and a combined U-16/U-18 division.

"We had teams from all over including Wisconsin and as far away as Badger/Greenbush," Kelley said. "For a lot of local teams it has been a rough season with very few games."

Kelley's U-16/U-18 Esko team, along with the Cloquet-based Minnesota Blast, are exceptions to the rule as both have played in a number of tournaments.

Tyler Korby's Minnesota Blast program includes teams in the U-14, U-16 and U-18 age groups. While most teams locally include mainly players from one or two schools, the Blast play in the higher Class A and Gold divisions, which allows for players from more schools to participate.

"We have kids from 18 different communities and have played 130 games between the several teams, or averaging about 40 games per team," Korby said. "We are a Cloquet-based team as we practice and host games here and this is where we are housed, but we have girls from all across northern Minnesota."

Because this was a B-level tournament, the Blast could not enter their tournament teams, but still managed a first place in the U-14 division. A makeshift U-18 Blast team took the consolation honors in that division while Cloquet took third place at U-14s.

Kelley's Esko squad defeated Badger/Greenbush in a wild championship game in the U-18 division by a score of 2-1. Esko took a thrilling 6-5 eight-inning semifinal win over Proctor and an equally impressive 9-7 win over Wisconsin Blackout in the quarterfinals.

"It's amazing how this team has come together since we put them together," said Kelley. "We came together in every aspect from hitting, fielding to pitching this past weekend."

The Blast U-14 championship win came by beating Grand Rapids in the title game and Cloquet in the opening round of the championship play on Sunday. 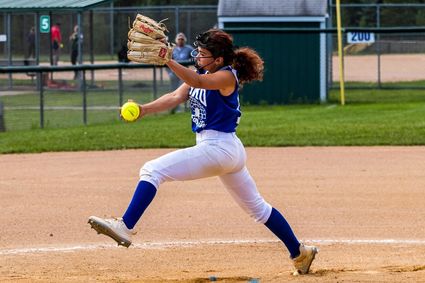 Esko's Miranda Kelley pitches against the Wisconsin Blackout in the first game of bracket play Sunday at Cloquet's Braun Park. The Wood City Classic tournament featured nearly 20 teams and is the only tournament planned at Braun this summer. Esko advanced to beat Proctor, then won the championship game against Badger/Greenbush.

"Overall it was a great weekend with each team playing a minimum of four games and some as many as seven," said Eckenberg. "Everyone was happy that the girls got to play and it was good to see Braun Park full of softball games and cheering fans at least once this season."

On a side note, the Blast have played numerous tournaments and have had great success this summer with the 18-year-old team taking second at NAFA National; they also won the Gold Division in West Fargo, Mankato and Fargo, plus they participated in the Gold State Tournament. The Blast U-14 also took fourth at the NAFA National Tournament.

Kelley's Esko squad also has been busy by playing in Fargo, Chippewa Falls and in nationals as well.

"This was a special weekend for all the girls and parents," said Kelley. "After not having a high school season, to be able to come back and play at home at Braun was incredible and there was just no better way to end the season."