County Seat returns to its theater 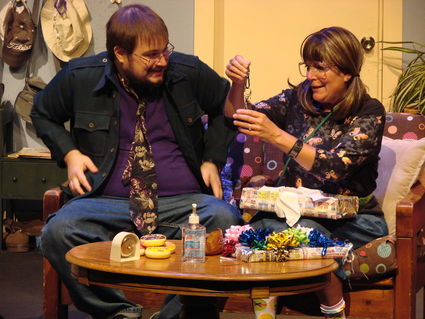 Norman (Coltt Sullivan) invites his friend Sheila (Ruthie Breuer) over to visit his pad in the County Seat Theater production of "The Boys Next Door." The play will run Aug. 14-16 and Aug. 20-23 at the Encore Performing Arts Center and Gallery in Cloquet.

After postponing the production of "The Boys Next Door" for five months due to the Covid-19 pandemic, the County Seat Theater Company is now ready to put on live theater once again, starting tonight.

General manager Joel Soukkala said the community theater is excited to begin performances again, for both emotional and financial reasons.

"Hopefully showing we can open this production safely will encourage others to attend future productions," he said "Every performance we have to cancel makes it that much tougher on our little nonprofit." He estimates nearly one third of the theater income budget will be lost by the end of the year with cancelled shows and classes.

"The Boys Next Door" is a comedy by Tom Griffin about four intellectualy disabled men sharing an apartment while being looked after by a burned out social worker. The four men try to make sense of a mixed-up world and helping Norman, who has a new girlfriend. Jack's life with his wife is put on hold, and he feels it's time to move on.

Originally slated for a March run, the show was shut down just weeks before opening night due to the statewide pandemic shutdown. Since then, the cast tried rehearsing online and also had some line runs with social distancing while gathered outside. Once it was finally safe for small groups to gather inside, the cast and crew were excited to return to the stage and put the final touches on the production.

"Rehearsals have been a challenge at times for us," Soukkala said. Cast members and staff had to wear masks during rehearsals along with extra cleaning protocol for the theater after each night of rehearsal. They won't be wearing masks for performances.

The theater will be seating only 47 in a house that usually seats 140 or more. The theater had a walk-through visit with Carlton County Public Health last week and was given the OK to allow theater-goers.

"With the safety and cleaning measures we have in place I believe we are doing all we can to ensure the safety of our patrons, volunteers and actors," Soukkala said.

The show will be presented Aug. 14-16 and Aug. 20-23 at the Encore Performing Arts Center and Gallery in Cloquet. Limited seating is available and reservations must be made in advance by calling the box office at 218-878-0071 or visiting the website at http://www.countyseattheater.com.

To help replenish some of the funds lost during the pandemic the theater has been getting creative. They are now hosting a silent auction on Facebook where bidding can be placed or by making an appointment and visiting the Encore Gallery, which features the artwork of local artists. On Sept. 10 the theater will host its fourth "Parking Lot Players Variety Show" on a temporary stage built in the back parking lot. People can also support the theater by making donations.