Plan B: Turn New Wine musical into a movie 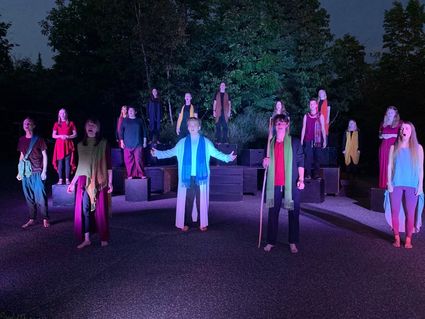 When the coronavirus pandemic stopped in-person school and almost all student activities this spring, directors of the local Christian-based theatrical group New Wine got creative.

The result was a feature-length movie of the musical "Children of Eden," which debuted on the back wall at Zion Lutheran Church last weekend and will be screened for the last time at 9:30 p.m. Thursday and Saturday, Aug. 13 and 15.

Theatrical director Amanda Olsen said that giving up is not in the DNA of New Wine.

"We felt like the kids had pretty much everything stripped from them this year," Olsen said. "Being together is important for our ministry as a whole, and we managed to find a way to overcome every obstacle together. It was never an option to give up."

So Olsen and musical director Jennifer Osborne moved rehearsals to Osborne's backyard and the group elected to make a movie instead of trying to put on a performance.

"We brought the stage and sound equipment to my yard. The kids would learn a section of the musical and then we would tape it," Osborne said, explaining that the father of one of the actors works at a local television station and did a lot of the filming, editing and production of the final movie. "The kids would get only a handful of rehearsals on each song, then they had to bring their A game and perform and tape it. It was a big undertaking, but we were able to pull it off."

The musical is based on the story of Genesis in the Bible, including the stories of Adam and Eve and Cain and Abel; the second part is about Noah's Ark, touching on themes of parents, children and faith. A total of 28 teenagers are in the production, but there was never a time that all 28 were on the stage at the same time. Rather, they chose different kids for each song and kept the numbers in line with whatever the governor's order was for gatherings, mostly between 10-15 people.

It wasn't a simple process. Blocking and choreography became more challenging with social distancing. Filming had to take place at night, so there were times they were working from 9 p.m. to after midnight. Kids had to stay at least 6 feet apart.

"If you see anyone touching each other in the movie, they are either siblings or in a shared household," Osborne said. She said they also used a few camera tricks to feign touching, such as in the scene where Eve meets God. "We couldn't have them hug but we didn't want them to just wave, so we made it look like they were going to hug and faded out."

The physical distancing challenges didn't end with the making of the movie. People watching the movie are also kept in groups (of those who purchased tickets together) at least 6 feet apart.

"We have four ushers with 6-foot sticks," she said with a chuckle. "They're pretty strict about distancing."

Tickets for Saturday's show are for sale online only at newwine.ludus.com for $5 each. A maximum of 130 tickets will be sold each night to allow for physical distancing. If they sell out, Osborne said they will consider adding additional screenings. The 28x13-foot screen was donated by Premiere Theaters.

Moviegoers are asked to park in the side parking lot and bring their own chairs or blankets, and snacks if desired. Masks are required "if you're milling about," she said, but people sitting in a family group watching the movie can remove them. The movie runs about two hours and 15 minutes.