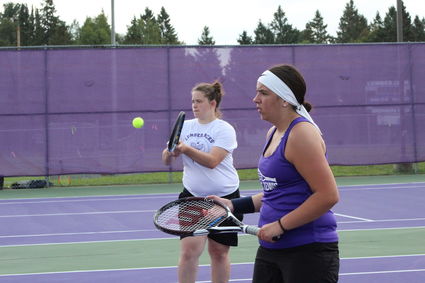 Tennis is back, and the Cloquet-Esko-Carlton girls team isn't letting Covid-19 stop them.

With 38 girls on the team this year, coach Derek Johnson said that "is the most we've seen on the roster in the past 10 years."

Johnson said the larger team includes a lot more Esko girls than he expected, including a number of volleyball players whose season was postponed to spring because of the pandemic.

"The past five years I've had one Esko girl and this year there are around 10, which is great," he said.

The Lumberjacks hosted their first match Monday, against an experienced Marshall team. The Hilltoppers prevailed, winning 4-3. The Hilltoppers won three of the four singles matches, with Cloquet junior Lydia Stone the lone CEC singles winner in the No. 4 slot. Other singles players for Cloquet are Addie Loeb at No. 1, Winnie Benjamin at No. 2 and Marina Dostal at No. 3.

The tables were turned in the doubles matches, with the Lumberjacks No. 1 team of Kylie McKeon and Carlee Maslowski winning in two sets (7-5 and 6-4), along with the No. 3 doubles team of Camden Pollard and Tenley Stewart, who also won in two sets. The No. 2 CEC doubles team of Bella Harriman and Brynn Martin lost in three sets.

"I figured if we wanted to win the match that we would have to sweep doubles and win one of the singles matches and we fell just short," Johnson said.

Accompanying the season are safety precautions and restrictions due to the ongoing Covid-19 pandemic. Johnson said players are wearing masks during huddles, doing a self assessment before each practice, practicing physical distancing on and off the court, and have hand sanitizer available. Items that tend to be high-volume touch areas - like water jugs and benches - have been eliminated. The equipment is cleaned after each practice and practices are split to limit the number of girls on the court at one time.

"I want these young athletes to have fun and enjoy being back out on the court with their friends," Johnson said.