Cross Country: Cardinals do the work to win 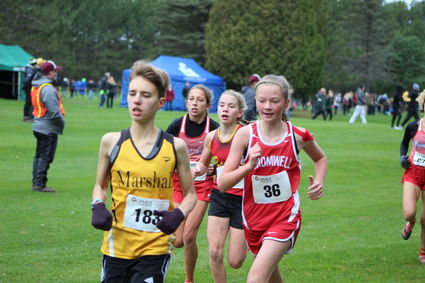 Cardinals Emaleigh Olesaik competes in the Section 7A meet last year in Cloquet, where she qualified to go to the state cross country meet. Olesaik won again at their meet on Thursday, Sept. 3 at Pine Valley.

Don't look now, but the Cromwell-Wright Cards could be on the verge of something special this cross country season. A year ago the Cards sent two athletes to the state meet and this year it could be even more.

"We had a great season with the largest team we have ever had and the most seniors ever," said the excited Cards coach Pete Koenig, explaining that the team graduated seven seniors total. "The boys team had many second-place team finishes, outstanding for such a small school."

"On the girls side, the team was pretty spread out over the different levels of competition. So we never had a full team," he added. "We did send both Noah Foster (then in ninth grade) and Emaleigh Olesaik (eighth grade) to state last season."

At this point the Cards have 19 runners registered. Koenig expects a few more to show up during the first week of school. For a school the size of Cromwell-Wright, those are good numbers.

"I always lean on my seniors for their leadership: Aiden Lehti, Elisabeth Kachinske and Madison Running," said Koenig. "I will also be depending on Noah Foster and Emaleigh Olesiak to be leaders due to their state experience."

This summer has been a big one for both Foster and Olesiak, who put in plenty of miles in an effort to get even better than in the previous season. It was the same game plan last summer for the young Cardinal superstars, but other runners are now following suit.

"The two state runners have each logged over 300 miles this summer, which puts them in a different running level. They are looking powerful," said Koenig. "We had another log in over 150 miles, which is awesome."

The Cardinals had a great first race last Friday at Greenway, where Olesiak and Aurora Gervais took first place in the varsity and JV races, respectively. Foster took second place behind Greenway's Geno Uhrbom (the perennial Section 7A champion).

"The rest of the kids are a mix of returning and new runners so we are developing them into greater long distance runners," said Koenig.

Although it's his 21st year of coaching cross country, his enthusiasm about the sport has not waned, even during a pandemic.

"We are excited to be out running again with our school family. This is really helping the kids satisfy their basic needs of community and socializing, in as safe a setting as we can provide," said Koenig. "I am super proud of the hard work the area coaches are doing arranging and hosting meets across our area; they are really stepping up for the kids."

He's the kind of coach who will look on the bright side.

"Because of the crazy year we are having due to the Covid-19 restrictions all around us, we are honestly just happy to have a season and hope that we will be allowed to finish it," he said. "We are also hoping that as the state hosts meets, a system will be realized so that we can have a section and state meet in some fashion or another."