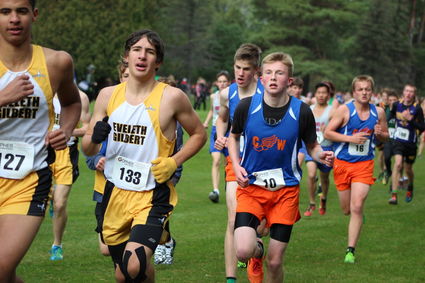 The Carlton/Wrenshall Raptors cross country girls and boys teams are hoping No. 3 will be a charm. After forming a cooperative team in 2018, last season was the second year in a row the Raptors had enough runners to compete as a team instead of just individuals. Head coach Eric Holter is seeing the results this year.

"Last year we had some forward movement with both the boys and girls teams showing up strong and placing respectably amongst the competition," he said. "This was the second year that we had enough runners to legitimately place as a team, so it was the added fuel needed for our runners to find that next gear come race day."

The Raptors lost only two runners to graduation on the boys side, but both were important runners to the program.

"The two individuals that we lost to graduation and did extremely well were Kaden Olesen and Spencer Hoeffling," said Holter. "These two runners brought a great vibe to the team, as well as a strong work ethic that has certainly transferred over to this year's squad."

The captains for the Raptors this year are Seth Mlodozyniec for the boys, while Lizzie Hey and Emma Cid will captain the girls squad.

"Those three earned their captain positions early, within the first week of practice, by their inspiring work ethic and positivity shared for everyone on the team to always show up with their best," Holter said.

Holter says there are many athletes to watch for on this Raptor squad. On the boys team, look for Jack Riley, Trent Bagne, Ben Hille and AJ Olesen, to name just a few. According to Holter, he could name all the boys on his team, which is a testament to how hard they have worked so far this season.

On the girls team, Holter expects Emma Cid, Abby Cid, Sara Cid, Morgan Laveau, Lizzie Hey and Alexis Thompson to help the team score points. Holter says his girls team has some dynamite runners who are out to crush some personal bests this year.

"Practice has been a hopeful foreshadowing of what is to come at our scheduled meets," Holter said. "We've been all over the place trying to find new challenges each day to work out athletes. We've made trips to Pine Valley in Cloquet, the Munger Trail, and Jay Cooke, to name a few of the various places we've held practice."

Like most coaches this fall, Holter is just happy to be able to have a season.

"My final thoughts are simply that we feel so blessed to have the opportunity to have a season to compete," said Holter. "These kids are enjoying every day granted and are making the best of things, and so are we as coaches."

The Raptors were racing against Esko and Cromwell-Wright at 4 p.m. Thursday at Cloquet's Pine Valley after this issue of the Pine Knot hit newsstands.