Lumberjacks roll over Esko in opener 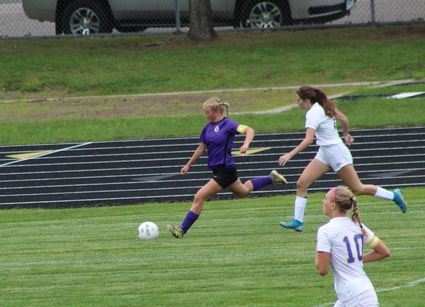 Cloquet senior Brenna Mattson shoots and scores from the corner during Tuesday's soccer match against county rival Esko. It was Cloquet's first match of the season, and Esko's second. The two teams will face off again for the last regular season game.

Or maybe it was the new normal, as three Lumberjack players knelt to show their support for the Black Lives Matters movement during the Star Spangled Banner (see Page 3) and all players observed social distancing while introductions were made, waving from the field instead of running out to high fives and handshakes.

In the end, the 'Jacks came away with a 5-0 win in their first game of the season.

"I was concerned going into the game that we would have some jitters early in the game and I think the girls proved me right," said Cloquet coach Bobbie Turner. "It was Esko's second game and our first of the season, but in the second half our girls shook off the rust and got things going."

Ilei Benson ignited the Lumberjack offense at the 14-minute mark of the first half. Benson entered the game just 10 seconds prior to scoring the opening goal of the game and was the recipient of a nifty crossing pass that skirted passed the Eskomo defense to the right side. Unattended Benson tucked it home for a 1-0 lead past Esko goalie Orie Randall.

Six minutes after Benson's opening goal, the Lumberjacks picked up their second goal of the game when Katie Turner launched a booming 20-yard kick that found a home in the lower left corner of the cage, giving Cloquet-Carlton a 2-0 lead at halftime.

While the Lumberjacks offense was doing its part getting the lead, the back line on defense was exceptional at running down Esko's offense time and time again, giving Cloquet goalie Gracie Meagher room to work.

"I can't say enough about our defense," said Meagher. "We are always talking and communicating and we just seem to have good chemistry."

The back line of Brook Simmonds, Sadie Senich, Mireye Moose and Katelyn Kelley all played on last year's section championship team. Their coordinated effort on the back end was key to providing protection for Meagher and the shutout.

If there was any question of shaking off rust, the Lumberjacks got rid of that notion quickly in the second half when Brenna Mattson snagged a kick high up in the air from Randall's left side and dropped the ball quietly into the back left corner. That was just one minute into the second half, making the score 3-0.

Benson notched her second goal of the game at the 54-minute mark when Alexa Snesrud found her parked on the left edge of the net on a pretty pass, putting Cloquet up 4-0 against an Esko team that beat Hermantown last week. 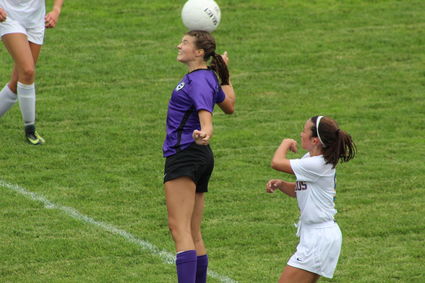 The Lumberjacks' Alexa Snesrud heads the ball during Tuesday's game against Esko. Snesrud scored the fifth and last goal of the game to make it 5-0.

Minutes after Benson's second goal, the Eskomos had a great chance when Avery Kuklinski found a crack in the 'Jacks defense and screamed down the field on a breakaway only to have the shot ring off the crossbar and fall to the ground. Meagher dropped on it and the moment was gone.

"When I saw her coming on the breakaway, I just came out and hoped," said Meagher. "I try to watch the player in that instance, keep good position and hope they make a mistake."

Cloquet ended the scoring when Snesrud took a feed from Macava Smith and rammed it home with five minutes remaining for the final of 5-0.

"It was a nice first game win," coach Turner said. "We had four different players score and it was nice to have some good scoring balance. At times in the past we've relied on just one or two players, so to have some balance is a good thing."

Cloquet was set to travel to Proctor Tuesday while Esko was headed to Hibbing the same afternoon.