Not your typical back to school days 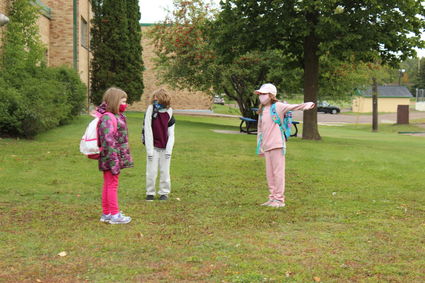 First-grader Makayla, left, chats with sisters Jocelyn and Nyah (third- and fourth-graders, respectively) before the doors opened Wednesday morning for the first day of school at Churchill Elementary in Cloquet. The three were observing Covid-19 guidelines, by wearing masks and standing apart from each other.

Katie Wilkinson was standing outside Churchill Elementary School before the doors even opened Wednesday, a pink gaiter pulled high over her nose, happily waiting for school to begin.

"I'm so excited," the fourth-grader said. "I even got ready before I had to. I had everything on an hour before school started."

In some ways, the first day of school was the same as always. Some children are in tears and reluctant to go inside, others can't wait to see teachers and friends in the classroom. Buses arrive one after the other. Parents and grandparents take photos - one grandmother takes a photo of her daughter taking a selfie with her son.

But this is a pandemic year, so no parents were allowed inside the school. And students who walked or were dropped off were scattered - in mostly socially distanced groups with masks on - before the front doors on the south side of the building opened at 8 a.m. They weren't allowed on the playground.

Churchill principal David Wangen said things were running smoothly after a summer of planning after school was abruptly switched to distance learning in the spring.

"The students are happy, they're all wearing masks," he said from his spot greeting buses Wednesday morning. "We had a great turnout for parent-teacher conferences. It looks like we're ready to get started."

Across town at Washington Elementary School, dean of students Mike Mattson was on bus duty with a bag of disposable masks in hand, ready to give one to anyone in need. So far, every student had arrived wearing a mask already, he said. In order to avoid congestion, buses made three stops as they pulled up to the back of the building, dropping off kindergarteners and first-graders first, then fourth-graders at a different door, then second- and third-graders at the final stop.

After the most recent batch of kids came through the second-grade doors, head custodian Gary Hughes stepped out - wearing a mask and holding a spray bottle - to clean the door handles on all sides. It's just part of the new normal at school now.

Washington principal Robbi Mondati said the school has made other changes in response to the pandemic, including students eating breakfast and lunch in the classrooms, no mixed morning recess, added fresh air and extra recess breaks and morning social-emotional check ins.

"Recess is by grade level now and each class within the grade has a special zone that they play in for the day and then rotate the following day," she said.

At Cloquet Senior High, kids were settling into classes that held fewer students, mostly because of students who chose to do distance learning.

Science teacher Mathew Winbigler spent the morning with mostly ninth-grade science classes, keeping things light with "lots of housekeeping items and chitchat." Just before lunch, his fourth-period students were answering questions anonymously on their Chromebooks from the classroom and from home. As their answers came in, Winbigler gave them the breakdown in real time. In response to a question about how they were feeling about being back in school (in person or by distance), Winbigler said three classes of students responded on a scale of 1 to 4, with 1 being "very excited or pumped" and 4 being "very nervous or blah." Here's how their 71 answers broke down: 10 percent answered "1," 45 percent answered "2," 34 percent answered "3," and 11 percent answered "4." 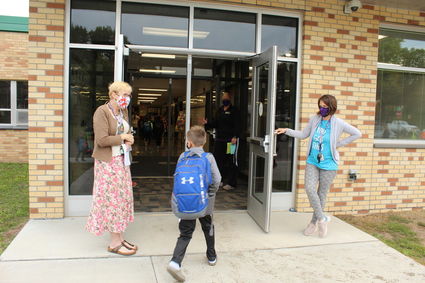 "It's worth taking a breath and recognizing that the person next to you might be thinking in a very different way," he told the ninth-graders.

After the poll, he took the students outside for "some social distancing socialization in the cool fresh air." He said the students had been pretty quiet that morning.

"I think there is a reality setting in that will pull these kids closer together no matter what happens," Winbigler said. "It is a defining moment that we are all living and sharing in real time."

One blip: A student at the high school in Esko came to school Tuesday with a pending test for Covid-19 that later came out as positive. Anyone with extensive contact with the student was notified by the school and health officials began tracking the case.

Esko superintendent Aaron Fischer said everything went according to health plans spelled out before school opened. Students were in class Wednesday.