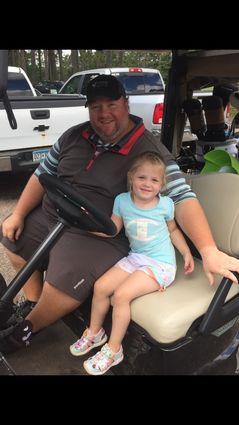 Dustin Nelson sits with daughter/golf partner, Kailey, who is 3 and was the youngest player in last month's Dan Sheff Memorial Parent Child Golf Tournament at the Cloquet Country Club.

The end of August and Labor Day weekend usually signify the beginning of the end of summer in northeastern Minnesota.

It is also the scheduled time for the Dan Sheff Memorial Parent Child Golf Tournament at the Cloquet Country Club. This year, 79 teams and nearly 150 golfers participated in the annual event during the last weekend of August. Covid-19 restrictions were prevalent and perfect outdoor weather helped make the tournament safe for entrants.

Don McKay and his son Anthony won this year's event. Anthony had to then rush away to prepare for his first day of college. Don previously worked on the greens crew at CCC and Anthony was employed in the pro shop this summer. Until a few weeks ago, Don held the CCC course record.

Runners-up in the championship flight were John Sheff and his daughter, Arica. They are the defending men's and women's club champions at CCC. The tourney is named in memory of John's dad. They finished one stroke back of the McKayse. Brad Tyman and his son, Brayden, took home third-place honors.

Golf is always acclaimed as a sport for a lifetime. This is very evident at the Sheff parent-child tourney and maybe even more so this year where the youngest entrant was 3-year-old Kailey Nelson (her partner was her dad) and the oldest player was purported to be 86.

"Other than the Cloquet Invitational, the Parent Child is our largest annual tournament," said Bill Manahan, PGA golf professional at the Cloquet Country Club. "Many come from far (away) from Cloquet just to get together as family and play in this event."

The Lawrence family - all descendants of Harry and Shirley Lawrence - bring a large entourage to the tourney each year. They counted 14 this year, plus those there to watch them. The Lawrence kids, now parents and grandparents themselves, grew up by the golf course and were active at the club like their parents.

"The weather was fantastic this year and Jud Crist and our greens crew had the course in fantastic shape," Manahan said.

"Many players were already asking about the dates of next year's event," Manahan said.