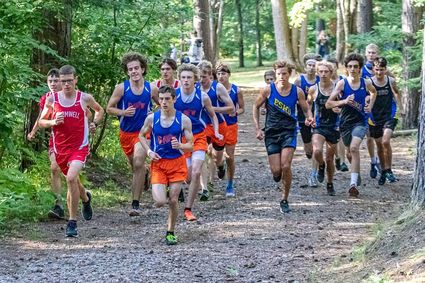 Carlton County runners were back on the cross country trail last week at Pine Valley in Cloquet. Esko won the varisty boys meet, above, but Noah Foster of Cromwell-Wright, far left, dominated the field. Carlton/Wrenshall won the girls race and the top finisher was Emaleigh Olesiak, left, of Cromwell-Wright, a state qualifier with Foster last year. Find more photos online at www.PineKnotNews.com.

There was a lot of the expected mixed with a little of the unexpected last Thursday as Esko, Carlton/Wrenshall and Cromwell-Wright hooked up in a cross country race at Pine Valley in Cloquet. The Cardinals had the top two individual finishers in both the boys and girls varsity races and the Eskomos took first place as a team followed by the Raptors in the boys meet. The girls race saw Carlton/Wrenshall nab team honors with Esko taking second. Cromwell-Wright did not have the required five finishers to place in the boys or girls team standings.

But what they lacked in numbers, the Cardinals made up for in speed.

Cromwell-Wright's Noah Foster dominated the boys varsity race in a time of 19:10 - nearly a minute faster than runner-up Jack Riley of Carlton/Wrenshall. Foster's teammate Emaleigh Olesiak took top honors in the girls race in a time of 23:10 while Esko's Grace Hrabik was second in 23:53.

"The summer running of both Noah and Emaleigh is really paying off early and we are starting to transition their training now to develop speed and strength," said Cromwell-Wright coach Peter Koenig. "At this time the rest of the team is working hard and developing their stamina, as that period comes to a close we will start seeing more surprises."

The surprise of the day was Esko's Jack McWilliams, who won the junior varsity race in a time of 22:18. That would have been the third-fastest time on the Esko's boys varsity.

"This is Jack's first year out for cross country; he typically plays football," said Esko coach Jeremy Hallsten. "His time was a great time for such a difficult course."

The Esko boys team took top honors with 38 points, just five points better than Carlton/Wrenshall. Following Foster and Riley in third was Nate Rengo of Esko. Trent Bagne of the Raptors was fourth, Tate Bloomquist of Cards was fifth. Esko had five runners in the top 11. The Raptors had five in the top 15.

Despite getting top individual honors in both the boys and girls varsity races Cromwell-Wright was out of the running for the team competition.

"We do not have a team in varsity at this time so there is only Emaleigh running for the girls," Koenig said. "For the boys, Tate Blomquist and Nathan Eliason are training hard with Noah and I can't wait to see what they can do."

All of the coaches were just happy to be back on the race course.

"It felt great to be out competing against one another again," said Hallsten. "Pine Valley is such a great running venue and course. ... The kids all enjoyed it and having some sense of normalcy, even despite all that is occurring around us and is out of our control."

Carlton/Wrenshall garnered first place in the girls division with 29 points while Esko finished second with 36 points. The Raptors got third, fourth and fifth place finishes from Emma Cid, Sara Cid and Abby Cid to lead their squad to the win, while Morgan Laveau and Lizzie Hey finished eighth and ninth respectively to round out the Raptors scoring as they had five runners in the top nine.

The Cardinals' Aurora Gervais blazed to an easy win in the girls junior varsity race with a time of 26:35, over four minutes faster than second-place winner Brooklyn Stewart of Esko. Stewart's time of 30:51 was a minute over third-place finisher Eliza DeCaigney of Carlton/Wrenshall and DeCaigny was just three-hundredths of a second faster than teammate Korah Crane. 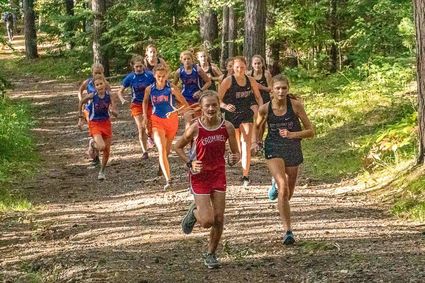 Carlton/Wrenshall won the girls race and the top finisher was Emaleigh Olesiak, left, of Cromwell-Wright, a state qualifier with Foster last year (front)

Koenig and his runners are thrilled with having a season during a pandemic.

"We are super excited to actually have a season after seeing all of the other sports shut down in our area," Koenig said. "The kids need to be together training and sharing, they are social creatures. We are obeying all of the rules put on us so that we can keep our season running as long as possible."

The boys junior high winner was Joe Cekalla of Esko, who ran the 2K race in 10:22, which was 12 seconds faster than Max Hanni of Cromwell-Wright and 30 seconds ahead of third-place finisher Michael Schiller, also of Cromwell-Wright.