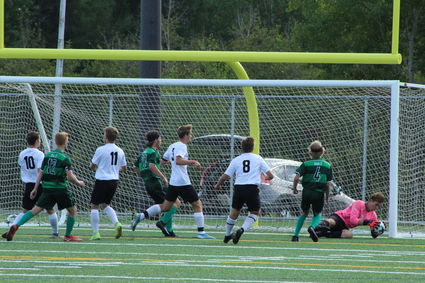 The Lumberjacks have averaged 8.75 goals per game while giving up less than a goal a game. The team attack the net in an 8-2 win over Proctor last week.

With 12 seniors on his roster and a plethora of talent, Cloquet/Esko/Carlton boys soccer coach Dave Bergan must feel like he robbed a bank. After four matches this season, the Lumberjacks have averaged 8.75 goals per game while giving up less than a goal a game. Needless to say the 'Jacks are 4-0 heading into their next home game Sept. 17 versus perennial power Duluth East. It promises to be the toughest match yet.

"This is just an amazing group of young men," said Bergan, in his second year at the helm for CEC. "We have so many talented and good kids that I feel very fortunate to be coaching them."

CEC opened with a 13-1 win over Two Harbors, followed by a 5-0 shutout of Hibbing, an 8-2 victory at Proctor and finally a 9-0 thumping of Mesabi East.

Leading the offensive thrust is senior forward Drake Schramm, who is the leading goal scorer in the state with 10. He also has 10 assists.

"I'm not surprised by what Drake is doing so far this year," Bergan said. "Last year I had him at central midfield and he should have been up front all along. Being up front is a natural position for him and you could see late in the year when I moved him up that he had the talent and was going to shine this year."

The back side of the 'Jacks lineup has four seniors: Nate Bong, Tyler Issendorf, Michael Kayser and Henry Slater. They are as tough a foursome as you'll find in the state.

"They all put in a lot of hard work this summer," Bergan said. "They are really gelling as a group and they help dictate play."

Spencer Rousseau and Logan Dushkin have been stingy in the middle and also are adept at turning the ball back in the opposite direction.

"Those two do a lot of dirty work and are unsung heroes," Bergan said. "On the wing we also have Paddy Genereau, who is as good as anyone out there."

Back in the nets the Lumberjacks are relying on sophomore Lucas Rauner, who has played well thus far.

"He is doing great and every day he is getting better and stronger," Bergan said. "In the summer Lucas has had the advantage of playing for a (soccer league) team where he has gotten some good coaching and great training along with some really good experience."

CEC was set to take on Duluth Marshall at home on Tuesday night, but the game was rescheduled due to a Covid-19 scare. 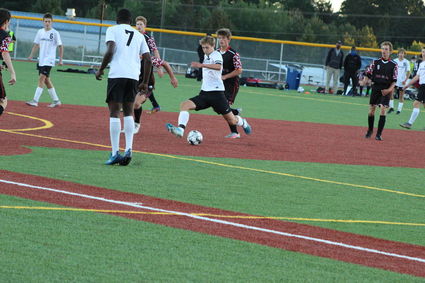 An emerging star for the 'Jacks is Drake Schramm, right, who has 10 goals and 10 assists.

"It turns out a junior varsity player from Mesabi East tested positive after our last game," Bergan said. "After talking with Marshall, we just felt it was better to be careful. It is all about comfort level and being safe. We talked with the guys today about enjoying every day we are out here on the field together, and that it is important we all need to take care of each other so that we can continue to play."

At this point Bergan has to hope that his team is able to stay on the field and that the season is not derailed by the pandemic.

"We feel fortunate we are still playing," Bergan said. "We have so many good players and so much depth that it can be hard to get everyone the playing time they like, but as a coach that is a good problem to have."