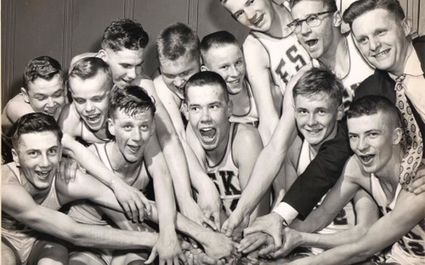 Esko players celebrated after winning the school's first District 26 basketball championship in 1955 with Harold Bergstedt right in the middle.

This year marked the 65th anniversary of Carlton County's first foray into the Minnesota State High School Basketball Tournament. Led by superstar Harold Bergstedt, Esko qualified for the tourney in March of 1955 at Williams Arena on the University of Minnesota campus. Bergstedt passed away at age 82 in February.

The state basketball tournament began in 1913 and no team from Carlton County was able to win Region 7 and advance to the tourney until Esko's achievement 42 years later. The region included the Duluth and Iron Range schools with no separate tournament classes based on school size, just one tournament.

Even with the advent of two classes and then multiple classes, Esko wouldn't reach the tournament again until 2003. Esko won the state title in 2014.

It's hard to fathom, but in 1955, there were no major league sports in Minnesota. Gophers football and the state basketball and hockey tournaments were the big Minnesota sports draws. Television was still very new and competitive girls high school sports were still 20 years into the future. Going to watch local high school events, on usually Friday evenings, was a big deal in the 1950s in many Minnesota communities.

The 1954-55 Esko team had just one loss when it left for Minneapolis that March. After defeating Morgan Park by 27 earlier in the year, it dropped the rematch.

Esko defeated Duluth Denfeld and Duluth Central to win the District 26 championship and got past Lindstrom-Center City and Tower-Soudan to take the region.

The Eskomos lost the opening state tournament game to New Prague 56-38 in front of a then-record crowd of 18,146 fans at Williams Arena. The team regrouped to beat Morris and Fairmont to win the consolation title and bring a trophy to Carlton County.

Bergstedt was a senior and was the team leader. Other Esko starters were Ron Korby (my relative), Jerry Anderson, Don Terwey, and Ernest Bylkas. Coopen Johnson was the Esko coach. Bergstedt averaged 28.5 points per game that season and for many years held the Esko record for most individual points in a game and basketball career. In a 2018 article in the Minnesota Hoops publication, Bergstedt was ranked as the 52nd best center across 100 year years of Minnesota basketball history.

Jerry Maunu, an Esko resident and Harold's first cousin said he was a "tremendous athlete. He starred at Esko in football and track as well. He went on to play on the (University of Minnesota Duluth) basketball team, three years as a starter, and led them to two small college national basketball tournaments."

Maunu was also proud to mention that Bergstedt, his daughter Michelle, the entire 1954-55 Esko team (which included another cousin Ron Mattinen), and yet another cousin high-jumper and track star Walter Maunu were all, among others, part of the inaugural Esko Athletic Hall of Fame.

Esko's accomplishments that season seemed to open the door for other Carlton County teams in the late 1950s and early 1960s. Carlton and Cloquet, on multiple occasions, ventured to Minneapolis. Cloquet's one-point loss to Marshall in the 1963 championship game is considered by many as one of the most exciting final games ever.

Prior to 1955, Esko had won multiple Polar League crowns. Led by Mel Koivisto and others. In the early 1950s, Esko was building a basketball dynasty. The Esko gymnasium, prior to their current expanded gym, was quite small. Speaking from experience, it was a referee's nightmare. It supposedly could hold 800 people but many must have been sitting on laps. It was loud and had no room on the baselines, making it very tough to officiate. I'm sure their home record was amazing. It was, and still is, difficult for Polar League opposition to win at Lincoln.

It's interesting to research and reminisce about the outstanding 1955 tournament team. It was historical. The 2019 Esko team might have joined in state tournament history had the season not been cut short due to the Covid-19 pandemic. The Eskomos had been soaring through the region when the high school league suspended all sports, including the girls basketball tournament that was in progress, ending Cromwell-Wright's run to the semifinal round.

I'm sure the players and coaches wonder what this year's outcome would have been. In my book, both teams went out as champions. It's been a tough year in many respects; hopefully, we can turn the corner and get better soon. Looking back at 1955 helps. 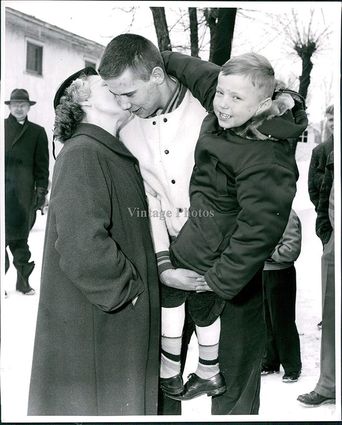 Harold Bergstedt faced a press mob when leaving for the state tournament in March of 1955. Here he is pictured saying goodbye to his mother and brother.

Steve Korby's interest in writing goes back to when he was a fourth-grader and editor of the Scan-Satellite school newspaper in Scanlon. He loves sports, especially golf. He welcomes human interest stories and tales regarding Carlton County residents, projects, history and plans. Send an email to [email protected]