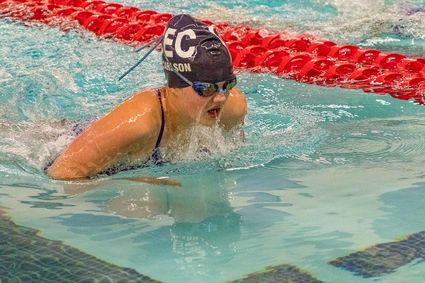 With two meets already this season, the Cloquet-Esko-Carlton girls swim team is seeing solid improvement over last season. The Lumberjacks have solid numbers and hope to balance a generally young team with enthusiasm and depth.

"We are still fairly young and talented team trying to figure out our best strengths," said CEC third-year coach Rachel Peterson. "I am always amazed at what these athletes can do and we always seem to have a surprise or three that come out of nowhere."

"We've already seen that the effort they've shown has started to pay off in terms of solid times in races," Peterson said. "We've already had a number of personal bests with only two meets and many of our swimmers are much faster starting the season than they were at the start of last season. Some of our key swimmers are close to already beating their best times from the end of last season, which has not been my experience until this year."

Peterson, like many coaches in the state, is not taking the season for granted. 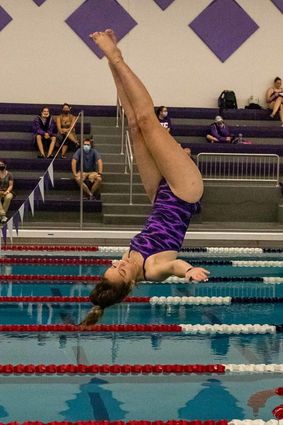 Kamryn Leigh takes a dive in a home meet against Denfeld.

"We expect to take every day in the pool as a gift," she said. "We will use our meets to improve on personal best times and support each other in being the best we can be this year."

So far this season some of the top performers have been Sandman, Chopskie, Rylee Demers, Peterson, Belich, Wenneson, Hietala, Carlson, Julie Peterson, Gorski and Zuck.

"We have had two home meets to date with the first against Grand Rapids, who are new to our conference, and our second was against Denfeld," Peterson said. "While we did not win, we held our own and our individual performances have been, for the most part, well in excess of our expectations. These girls have much to be proud of so far and we are looking forward to seeing how far we can go."