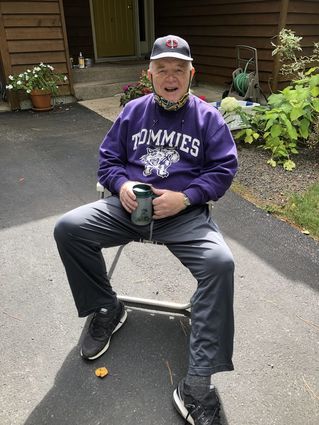 Athletes who played for Cloquet, Barnum, Proctor, and the University of Minnesota Duluth are likely to tell you they've never forgotten fiery redheaded coach and teacher Jerry Erickson. He was my former coach and I recently caught up with him in his retirement from teaching and coaching.

He grew up in Poplar in northwest Wisconsin, a baseball haven. It was the favorite sport for both kids and adults. Sunday afternoons in the summer meant families going to the ballpark to support the town team.

After high school, Erickson attended the University of Wisconsin Superior and received a degree in elementary education. He was intent on being a teacher. Jerry played basketball and first base in college, and was a great hitter for the Yellowjackets.

Erickson's first teaching assignment was as a sixth-grade teacher at Leach Elementary School on the west side of Cloquet. Jerry was hired by Cloquet school administrator Oliver Hoyum. He and his wife Cathy bought a house (which subsequently became a home with four daughters) on Hawthorne Avenue, making walking to work an option.

In addition to teaching, he was contracted to assist the youth basketball and baseball programs. After a couple of years in the classroom and gymnasium, the head varsity baseball coach position opened at Cloquet. Don Bordeau had been the hockey and baseball coach and left to go to Duluth East. Jerry applied for and was awarded the baseball job, and also became the eighth-grade boys basketball coach in the 1960s.

Jerry would go on to be a very successful varsity boys basketball coach at Cloquet with a record of 201 wins and 136 losses in 16 seasons.

He had several other stints with girls and college basketball coaching assignments but my focus is devoted to his baseball coaching.

His coaching methods and systems led to the first and second Cloquet teams to represent Region 7 in the Minnesota State High School Baseball Tournament. Jerry coached tournament teams from the 1972 and 1975 seasons. I was a catcher on the 1972 team.

Erickson started spring baseball practices and tryouts on the first day rules permitted - indoors, of course, in the Cloquet Middle School gymnasium. March, April, and May can be brutal weather for high school baseball in northern Minnesota. Undoubtedly, no other high school baseball team worked harder on physical conditioning and "situational" baseball.

As long as the Cloquet diamonds were unplayable in the spring with snow and ice, the team practiced indoors. To get players in shape, Erickson utilized a St. Louis Cardinal spring training program. There was plenty of stretching, arm rotations, burpees, base stealing drills and running.

The Cloquet school district was one of the first in the region to purchase a pitching machine and it had an indoor batting cage. But everyone was always anxious to get outside and play. Coach Erickson would even have the squad shoveling snow in the outfield and pouring squirts of gasoline and burning it in attempts to dry off the Athletic Park infield.

Jerry said that whatever he learned about baseball coaching, credit must be given to Dale Cruse, his college baseball coach, and Dick Siebert, the 30-year baseball coach at the University of Minnesota. Siebert took pride in improving all levels of baseball in Minnesota and conducted many clinics for new and seasoned high school coaches alike. Erickson journeyed to the Twin Cities area nearly every year with his pitchers and catchers and other team leaders to attend Siebert-led training sessions.

Erickson found that the common thread for winning teams from the region was that their coaches not only coached the high school programs but also summer baseball. Erickson soon followed suit. He coached high school in the spring, then American Legion, Midgets, and Cadets in the summer. Legion games were Mondays, Wednesdays, and Fridays, and the others on Tuesdays and Thursdays. Practices were on non-game days for all teams. He also drove the team buses.

Both the 1972 and 1975 Cloquet state tourney teams had strong pitching staffs. The 1972 team had fireballing Rick Wahtera, steady Frank Yetka, and third starter and spot reliever Randy Hawkinson. The 1975 team had Dean Levinski, who would in later years go on to coach Lumberjack baseball and girls basketball, and Pete Franz.

"Of course, back then, we didn't have radar guns, but I would bet Wahtera threw it in the 90-mph range," Jerry said. "He walked a lot of guys, but struck out a lot too. Dean and Frank were quite similar pitchers. Both had good control, sweeping curve balls, and were smart on how they managed a game. Franz was not only a great pitcher but a tremendous hitter. He stroked a ball out of Wade Stadium against the wind. He had many colleges looking at him, including the Gophers, but chose to stay closer to home and I think he still has several records with the UMD Bulldogs. Of course, there was only one Hawk."

Randy "The Hawk" Hawkinson was a left-handed, quirky pitcher. He was counted on as a terrific reliever, with a big curve ball, and often squelched opponents' rallies by picking base runners off first base. He was a bit eccentric. Erickson said that in the 1972 region tourney finals, Greenway was mounting a rally and had the bases loaded with Hawkinson pitching. He threw two balls to the next batter. Erickson called time out and went to the mound. Jerry recalls saying "Hey Hawk, the bases are loaded, you can't walk this guy." He said Hawk looked around almost in surprise and said "Hey, you're right, I better get this guy out." He did, and the Lumberjacks won the region.

In the 1972 state tournament, Cloquet beat Marshall in the first round, lost to eventual state champion Richfield 2-0 in the semifinals, but then beat Bemidji for third place, a trophy, and claim to the northern Minnesota championship. Bemidji would win the 1973 title. In 1975, after walloping Alexandria, Cloquet lost its next two to Fairmont and St. Peter.

I had to ask him which state baseball tourney team was better. Jerry said that the 1975 team faced two pitchers that eventually made it to the major leagues, Serum and Jerry Ujdur from Hermantown and subsequently the Detroit Tigers. Both times, Cloquet won the games handily.

I quickly reminded him that the 1972 team won its last game and brought a trophy back to Carlton County. Erickson acknowledged that, but didn't want to commit and ended the conversation by saying both teams had their strengths.

I think he had to have mellowed since those coaching days in the 1970s. After talking with him again, I'll probably wake up in the middle of the night, in a cold sweat wondering if I threw to the right base from behind the plate. He will be letting me know in my dream.

From the mouth of Jerry Erickson: 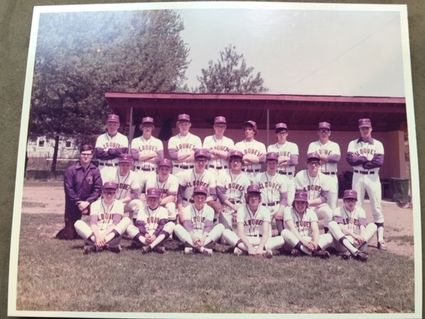 The 1972 team photo for the Cloquet baseball team includes coach Erickson at the far left in the back row. And that's Steve Korby in front of Erickson's left elbow.

The following were submitted to Steve Korby by Rick Hagen, left fielder for the 1970 Cloquet Lumberjacks High School baseball team. They are, per Rick, typical quotes from Coach Jerry Erickson during the course of a season:

-urging a pitcher to bring the ball down in the strike zone: “bend the back!”

- advising batters how to pick out a satisfactory wooden bat: “look for the oldest, dirtiest bat. Its got hits in it.”

-cautioning a hitter with a two ball count not to help a wild pitcher: “doesn’t want to go three!”

- after a difficult loss to a Proctor team that lacked full uniforms: “ Blue jeans! We lost to a bunch of guys in blue jeans!”

Steve Korby's interest in writing goes back to when he was in fourth grade and editor of the Scan-Satellite school newspaper in Scanlon.