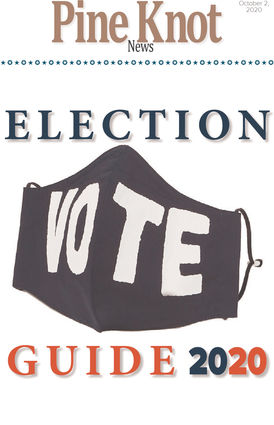 The dynamics of this year's general election brings to mind a question: Is it the pandemic or the rhetoric?

Minnesotans are requesting absentee ballots in record numbers for the Nov. 3 election - "Off the charts," as secretary of state Steve Simon said when early voting began Sept. 18.

After an August statewide primary that saw 60 percent of the vote come via absentee or mail-in vote, the general election is sure to keep the trend going.

In Carlton County, absentee and early in-person voting is heavy and steady, acting auditor/treasurer Kathy Korteum reported at a county board meeting Monday. She said there have been 50 people coming into the courthouse in Carlton each day to vote since early voting began in mid-September.

There has been a strong push from Simon and his office for people to think about alternative ways to voting in a polling site since the Covid-19 pandemic and its call for physical distancing.

By early voting last month, more than 1 million Minnesotans had requested absentee ballots. That compares to just 58,000 requests in 2018. And in the last presidential election, in 2016, there were 700,000 absentee ballots cast.

And of that tally in 2016, there were no cases of fraud detected, Simon said. It's the same case for mail-in voting, which Minnesota has used for rural areas since 1988. No-excuse absentee ballots, meaning you don't need a reason to not vote in person, have been allowed since 2014.

The only real change to the system this year is that mailed ballots do not require a witness signature. Not following the requirements on the witness portion of mailed ballots has been the No. 1 reason for rejection, Simon said.

Political forces have been at work to whip up questions about voting in a pandemic, mostly in the camp of President Trump, who has fanned flames claiming massive corrupt ballot practices with little evidence to back it up. Adding to the fog was the dustup with the U.S. Postal Service slowing delivery of its mail by closing processing centers and destroying sorting machines in the past few months.

That political chicanery is likely driving voters to get ballots in and make sure they are counted.

The common refrain from those voting at the courthouse has been that people wanted to make sure their vote counted, Korteum said.

She said post office officials say they are confident they can handle absentee and mail-in ballots. Voters using the mail system are urged to send ballots at least a week before Nov. 3. If the ballots are postmarked by Election Day there is a seven-day delivery period for the ballots to arrive and be counted.

A statewide poll conducted by the Star Tribune newspaper, Twin Cities area television station KARE, and Minnesota Public Radio showed at least 60 percent of Minnesotans plan to head to the polls on Election Day. In northern Minnesota, 69 percent said they plan to vote in person.

If you haven't voted, or even if you have, see this week's guide to the candidates. It starts on Page 7 of the paper or find it here online: https://www.pineknotnews.com/section/elections_2020.