History repeats itself at the Shaw building 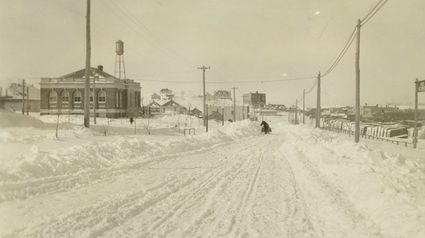 The Shaw Memorial Library in the winter of 1922, two years after construction of the new building was completed in 1920. The building didn't start its life with a flat roof, but that's what it has now, and it needs to be replaced. The historical society is fundraising to help pay for it.

One hundred years ago, Cloquet's library was reborn from the ashes of the 1918 fire, thanks to the generosity of two sisters.

One hundred years later, the descendants of those sisters - Cordelia (Shaw) Lynds and Hattie (Shaw) DeLescaille - are again coming to the rescue of the building that bears their family name. Now it's water (and snow) that is damaging the building, which is in desperate need of a new roof and more.

The building - and the problems that go with an old structure - was theirs.

Problem No. 2 is they don't have money to replace it.

Enter the Shaw family (and many other donors, large and small). While there are no longer any Shaw family members living in Cloquet, they have a special place in their hearts for this northern Minnesota city.

On a conference call from the West Coast last month, four descendants of George Stearns Shaw - Hattie and Cordelia's father and the person the building is named after - spoke with the Pine Knot News and CCHS executive director Beth Lyle.

It was a conversation with one foot in the past and one in the present. More than a century after both fire and flu devastated Cloquet, Cordelia's great-great-grandson Robert "Shaw" Lynds was living through the wildfires there - seeing the orange haze, smelling the smoke - as he spoke, and the entire country is coping with the worst pandemic since the Spanish flu.

George Stearns Shaw, owner of Cloquet Lumber Company, petitioned the village council to create the city's first library in the late 1800s and served on the first library board.

After the first library building burned down in October 1918, Cordelia's husband wrote to the library board from California - where the two families had recently relocated - stating that the Shaw daughters were interested in donating money toward building the new library.

"They're so proud of this building and what their family did," Lyle said.

"I fell in love with the area from the descriptions and stories," Rick said.

Therefore, when the CCHS director reached out to the family in January about having a massive celebration of the 100-year-old building, Lyle found Shaw family members willing to make a trip back to Cloquet to honor that history.

Then the pandemic hit. The historical society closed to the public, and the planned celebration (and Shaw family trip) were both postponed.

Work to be done

That wasn't the end of the story, just the start of another chapter. Since a CCHS newsletter came out with news of a fundraising drive for a new roof and the history of its storied building, the "combined families of George Stearns Shaw" decided to do what they can to make sure the Shaw Memorial Library building lasts another 100 years.

So far, they have contributed close to $30,000 toward the cost of a new roof. They hope Carlton County residents, or even folks who have moved away, will add their own donations to the cause.

Before the Shaw family donations, Barry and Vivian Bergquist and Bergquist Imports had donated $5,000, earmarked for the roof, and another $2,000 came in before CCHS launched its fundraising drive. Smaller donations are coming in now as well. The board is working on matching grants, and appreciate any help with grant writing as well, or in-kind donations from area businesses. 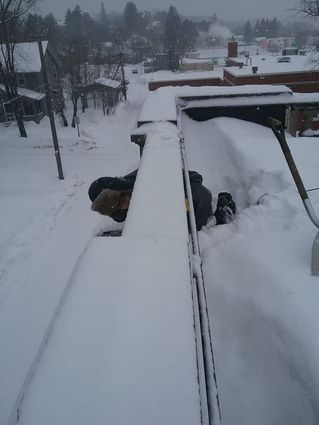 Sam Kavanaugh chips ice away from the edge of the Shaw Memorial Library building in the winter on a trip to the roof with his dad, Ed Kavanaugh, CCHS board president.

Lyle said the historical society board recently accepted a bid from Commercial Roofing, Inc. of Barnum to replace the roof this fall. The cost is up to $60,000, barring any surprises. They can't wait any longer to fix the roof, but board members are hoping they won't have to incur long-term debt to do it.

CCHS board president Ed Kavanaugh talked about going up on the roof after various snowstorms to evaluate or chip ice away so melting snow could find its way off the roof rather than a low spot in the roof that "we're thinking of putting some fish in," he said wryly.

"We wouldn't make it through another winter without a new roof," Lyle said.

Roof donations can be made online at http://www.carltoncountyhistory.org or mailed to

Carlton County Historical Society, 406 Cloquet Ave., Cloquet MN 55720. The building is still closed to the public for now because of the pandemic.