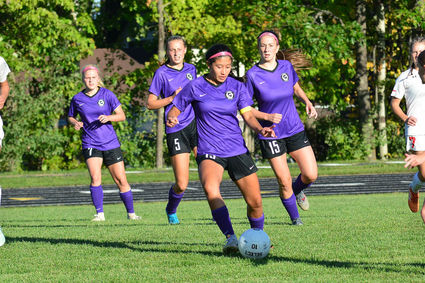 CEC #13 Mireye Moose takes control of the ball to lead a charge downfield as the Lumberjacks take on the Duluth East Greyhounds earlier this season.

Currently ranked ninth in the state for Class A teams, it's been another great week for the Cloquet girls soccer team. Not only did the Lumberjacks pick up two important late-season wins, they also had a second player commit to playing college soccer.

Last week the 'Jacks downed Duluth Denfeld 1-0. On Tuesday afternoon the Lumberjacks traveled to Grand Rapids and blanked the Thunderhawks 4-0 to improve to 8-0 on the season.

"Our defense was solid as usual," said Cloquet coach Bobbie Turner of the Grand Rapids game that saw Cloquet get a pair of goals in each half. The 'Jacks outshot the Thunderhawks 16-2.

"I was especially impressed with the intensity we had from everyone, there was no letdown regardless of who was in the game."

Alexa Snesrud scored first for Cloquet with an assist to goalie Gracie Meagher and Jillian McCullough added an unassisted goal to give the 'Jacks a 2-0 halftime edge.

Cloquet-Carlton's second-half goals were scored by Katie Turner and Brenna Mattson with an assist from Elle Carlson.

"Going into our final games, and then looking ahead to postseason, offensively we were focused on looking for our best options," said Turner. "Shoot was secondary."

On Sunday, Mattson announced online her intentions of playing soccer at the University of Wisconsin Superior. Previously, goaltender Gracie Meagher announced that she will play soccer at the College of St. Scholastica.

"Beyond excited and honored to announce that I will be continuing my education and soccer career at UWS," Mattson wrote. "Thank you to all my coaches, teammates, family and friends who have helped me get to where I am today. Go Yellowjackets."