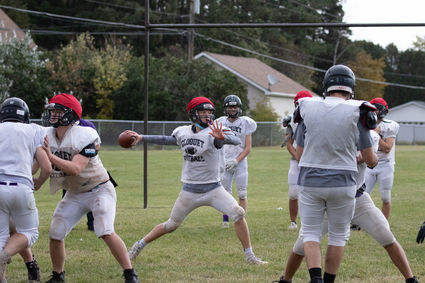 Here's a quick look at what fans can expect from area football teams in a shortened season. Aside from the continued pandemic prtocols around all high school sports, spectators will be limted at games.

If the Cloquet Lumberjack football team is going to compete for a sectional football title, they'll need to rely on strong line play. Fortunately, this year's version of the 'Jacks has what appears to be an impressive group in the trenches.

"We will be very strong up front," said longtime Cloquet head coach Tom Lenarz. "We have a senior-dominated offensive and defensive line."

Among the leaders on the offensive line will be Reese Kolodge and Cody Tibetts.

Last year the Lumberjacks went 7-2 and fell in the section semifinals to Chisago Lakes, the eventual section champions. Cloquet also will need to overcome the loss of star running backs Markus Pokornowski and Cole Ketola as well as quarterback Dalton Bottila, but Lumberjacks fans will be happy to know they do have some talented athletes who are ready to step up.

"We will have a very explosive backfield, but not a ton of experience, and we will have to learn on the fly," said Lenarz.

Marshall Hayes saw the most amount of playing time as a sophomore and is expected to be a force in the backfield.

Practices are good, despite a limited amount of prep time.

"Practice has gone really well," said Lenarz. "The MSHSL made it tougher by imposing lots of rules limiting contact the first week, so we will have very few full-contact practices between Day One and our first game."

The Lumberjacks appear to be one of the favorites in Section 7AAAA again this season, and it appears the amount of off-season work has prepared them well.

"We expect to be very competitive in the district and section," Lenarz said. "I think the boys have worked extremely hard in the off season to be ready for this year. I'm happy we are getting a chance to show what we can do."

Cloquet's first home game will be Oct. 16 against Hibbing. Only spectators whose names are on a player list are allowed inside Bromberg Field, so the school can keep the number of fans below 250 as required by the state.

Last season was a bounce-back year for the Esko team. The Eskomos advanced to the Minnesota State High School football tournament but were bounced from the tourney in the first round.

"We finished 8-3 and lost in the first round of the state playoffs to Annandale," said Esko head coach Scott Arntson.

If the Eskomos are to repeat as section champions, they will need to overcome the losses of several key players. Preston Lowe was the District Defensive Player of the Year, Dylan Vinje was the starting quarterback and Keegan Akervik was a strong two-way line player at offensive guard and defensive end. However, the cupboard is not bare for the Eskomos.

"We have good size and a lot of seniors," said an optimistic Arntson. "We still have a lot we need to improve on."

While some programs have struggled to find numbers, the Eskomos are not facing that problem. With solid numbers and a good attitude, you can look for another good season out of the perennial tough Eskomos.

"Numbers are healthy throughout the program," Arntson said. "The guys have high expectations for themselves."

Last year was another impressive season for the Moose Lake/Willow River football team. Under longtime head coach Dave Louzek, the Rebels went 8-3 and rolled to another section championship before falling to Paynesville in the state quarterfinals. This year the Rebels are back and loaded with returnees ... which should bode well for the upcoming season.

"Strength of this team is the number of returning starters from last year's team," Louzek said. "We have a very smart, athletic, hard working group of kids."

That is 11 starters who return from a very good team. Prior to the fall, many coaches around the state were picking the Rebels to be one of the top two teams in the state with a legitimate shot at that elusive state title.

Perhaps the most unfortunate thing is the fact there will be no state tournament this season.

"This group, like all Rebel football teams, comes into the season with very high expectations and will make the most of a shortened playoff season that does not feature a state tournament this year," said Louzek.

"Practices have been better than expected. We have had to change things from the way we normally coach the kids, and the kids have responded very well."

In their first year of running a cooperative program, the Carlton/Wrenshall Raptor football team rolled to an undefeated 9-man regular season as they finished with a gaudy 8-0 record. That changed when they competed in the Section 7A 11-man playoffs. After beating Northwoods in the quarterfinal round, the Raptors lost to eventual section champion Deer River in the semifinals.

"Our strength should be on our offensive and defensive lines," said Raptor head coach Jeremy Zywicki. "We also are very deep at the running back position."

However, if Raptor opponents feel it should be easy pickings this year, they could not be further from the truth as Carlton/Wrenshall returns a couple of key players on the line.

"Aaron Schilla and Kristian Herman each started on both sides of the ball," said Zywicki. "Both Aaron and Kristian will anchor our offensive and defensive lines and Kyle Sitter, who played LB and CB when we moved up to 1A, is also back."

Like many coaches, Zywicki has been scrambling to put things together on short notice.

"Practices have been going well," said Zywicki. "We were at 25 players in week two, but now due to players deciding to opt out because of Covid and other factors, we are currently around 19-20. I believe we should do well. It will definitely be a challenge with losing so many key players from last year, but we are relying on other kids to step up and fill those gaps."

The Barnum Bombers football team is hoping a strong returning nucleus of players will help them build on a team that staggered to a 1-8 record last season. First-year head coach Bob Minkkinen feels this year's returning players learned a lot from a season ago.

It has been a so-far-so-good scenario at practice so far. According to Minkkinen, the players have been showing up at practice with strong efforts every day and a good attitude.

"The kids are always willing to learn," Minkkinen said. "We are always looking to be better, though, and with really good numbers which are probably up from the past few seasons. We also gained a few student athletes who did not play last year. We have high aspirations for this group of student athletes and expect to compete for the section championship."

After struggling to a 3-6 season last fall, the Cromwell-Wright Area Cardinals are hoping that returning all but one player from a year ago will help reverse their fortunes this year.

That means the Cards will have seven of nine starters returning, but that is not the only good news for Cromwell-Wright.

"We also gained a few players from Floodwood, as we are combining as a team this season," said Gronner. "Our name is now Cromwell-Wright Area."

Gronner is optimistic that this group would be a contender for the section championship.

"The strength of this team is size and how physical they are," said Gronner. "I've got one of my bigger teams in recent memory and I have some guys that like to hit. Practices have been going well and the biggest challenge is getting a lot of things in in a short amount of time."

The Cards also will need to get up to speed as a group since they are combining teams with Floodwood.

"Our offense is totally new to everyone from last year, so that has been a challenge in a short timeframe," Gronner said. "Getting players to bond has been going well so far, but it is a process. As far as expectations, we hope to compete for a section championship. That is a goal for us every season. For coaches, this has been a challenge."

Like most coaches who thought there would be no season, Gronner feels he is in a mad scramble to get his team onto the field.

"I definitely feel the least prepared as a coach ever because I put zero thought into football in August," Gronner said. "It has been a little tough playing catchup, but I am very excited that we have football this fall, though."

If the South Ridge Panthers want to repeat as the Section 5 nine-man champions this year, they will have to overcome a massive loss of talent from last year's team.

"We went 8-3 last year and then lost to Mountain Iron-Buhl in the first round of the state playoffs," said Panther coach Brent Johnson. "We lost seven seniors from last year's team, and all were pretty much starters for us."

Among those who are expected to step in and play key roles for the Panthers are returners Connor Bushbaum at running back, Deekon Anvid at center and wide receiver Weston Stroshein. 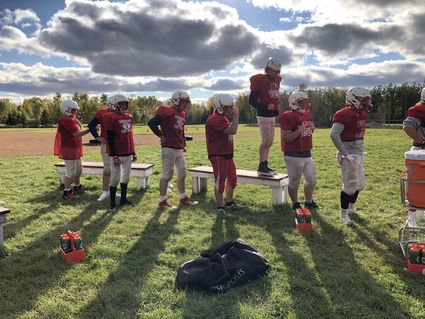 Cardinals football players wait for their turn to run a drill on a glorious fall afternoon last Thursday. The team struggled with numbers last year, but not anymore. They added Floodwood to the mix so it is now the Cromwell-Wright Area team.

"Our strength this year will be our size on the line, our speed and defense," said Johnson. "Practices are going well; we just have a little shorter time to prepare for the first game."

Unfortunately for the Panthers, the Covid-19 pandemic appears to have hurt their numbers in the football program. With nine-man rosters already being short, that could be tough as the season wears on.

"Our numbers are down a little this year with 24 players," said Johnson. "We had everyone that I thought would come out in grades 10 through 12, just not as many freshmen as I would like."

Since Johnson has been at the helm of the Panthers, they always seem to be fighting for a sectional crown, and this year should be no exception.

"Our goals for this year are to finish the regular season strong and healthy," Johnson said. "And our other goal is to make it the section championship game again ... where anything can happen."