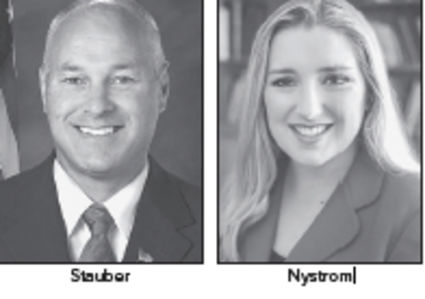 Editor’s note: The following questions and answers were facilitated by the Minnesota Newspaper Association for its member newspapers.

Q If elected, what is your top priority for the 2021 Congress?

A Two years ago, one of the focal points of my campaign as a first-time congressional candidate was to let you, the voters, know who I am. I introduced myself to you and shared my story, what my priorities are, and how I wanted to represent the 8th congressional district. Professional hockey player, small-business owner, police officer: those were the uniforms I wore throughout my life. That uniform changed in 2019 when I took my oath.

Whether it's a suit and tie when I'm at the White House meeting with President Trump on criminal justice reform, slacks and a sport coat when I visit with small-business owners in Cambridge, or jeans and Carhartts when I'm visiting with farmers, loggers, or miners, my purpose is resolute. My priority isn't an issue: It's you the people. I am humbled to be your congressman.

For the past two years I have been listening to you and learning from you. My focus in Congress is on you.

Q How do you grade the federal government's response to the pandemic?

A Before the global pandemic struck, our economy was churning at historic levels. Unemployment was the lowest since before we landed on the moon. I supported a pro-growth economy that got us to record levels and we'll get there again.

I was proud to support bipartisan legislation like the CARES Act that provided emergency funding and resources for federal, state, and local responses to Covid-19, as well as provide small businesses with emergency relief (Paycheck Protection Program) that saved more than 50 million jobs.

One thing the pandemic has shown us is we must become a more self-reliant country. Our miners, manufacturers, and others throughout our domestic supply chain eagerly await the chance to serve their nation and responsibly source these resources needed for every sector of our economy.

A Our nation and allies must stand unified and resolute in the fight against terrorism. Freedom must always triumph over terror. America's decisive action earlier this year eliminated Iraq's top general, Qassem Soleimani, who was a leading sponsor of terrorism, responsible for the deaths of hundreds of thousands including hundreds of American service members. We must root out evil wherever it hides and stand against terroristic and oppressive regimes. Accordingly, we must do all we can to ensure our men and women in uniform have the resources they need to accomplish their missions. Earlier this year, I was proud to support the largest pay raise in decades for our troops who heroically defend our freedom.

A Minnesotans want and Americans need high-quality, affordable and accessible health care that is patient-driven and physician-guided, putting individuals in charge of their health care rather than the government. I remain committed to working with Republicans and Democrats on true health care reform that lowers costs and increases access to quality health care by setting up association health plans that allow groups and businesses to band together for better rates, allowing insurance companies to cross state lines, and doing all we can to ensure health insurance is portable and affordable.

A Rising energy prices hurt families, commuters, job seekers, small-business owners, miners, loggers, and farmers. We need an "all of the above" comprehensive energy plan that creates American jobs and leads us toward energy independence by utilizing environmentally friendly domestic production of energy resources in the near term while we develop the clean alternative energy sources of the future, including nuclear power, wind, solar, biomass, hydrogen, hydropower, among others.

A From playing hockey all my life to my two-plus decades of committed public service in law enforcement, I am a problem solver. Like so many Minnesotans, I grew up on the rink. After high school, I was the team captain for Lake Superior State University where we won the national championship. I retired from the Duluth Police Department after 22 years of service and considered it a privilege to serve. My wife, Jodi, is an Iraq war veteran who retired from the 148th Fighter Wing as the first female command chief in the history of the unit. Jodi and I have four children and a foster baby and they are one of the reasons I am running for re-election to Congress. We have to do all we can to ensure the American dream is within reach for their generation and generations to come so they can enjoy the freedom and prosperity that has made America great.

A Living with Type 1 diabetes, I pay nearly $1,000 out of pocket every month for my health care - and that's with good insurance. The price of insulin has gone up nearly 1200 percent since I was diagnosed as a teenager, and I've had enough. It's not just insulin. Prescription drug prices are skyrocketing and too many among us can no longer afford their prescriptions or are too afraid of the bill to go to the doctor. It's unacceptable and the Covid-19 pandemic has only made it worse.

A The federal government's response to the pandemic has been abysmal. The economy fundamentally will not recover until we beat this virus. We need universal, easy-to-access, one-day or immediate testing. We need more protective equipment for our front line health care workers. We need a coherent plan from the federal government on when certain areas should be closed and when they shouldn't.

On the economic side, we need to continue the unemployment benefits with $600 additional per week. We also need support for our cities and states so that they don't have to cut their budgets right in the midst of the greatest economic downturn since the Great Depression.

A My husband, Paul, is a 12- year Army veteran. He served in Iraq and is currently in the Army Reserve. So when I think about foreign policy, my first concern is for our troops and our alliances around the globe. "America first" should not also mean "America alone," and I'm deeply concerned about how President Trump may have damaged our relationships with our allies.

A I support health care plans that cover everything that patients need to get good, quality care without having to choose between buying groceries and paying for their prescriptions. Association health plans do not have to cover basic care like maternity care or offer prescription coverage and can set different premium rates based on age, gender, job, and for thousands of Minnesotans like me, pre-existing conditions.

The lack of adequate coverage presents a dangerous risk for workers on these plans who would be forced to pay out of pocket for anything not covered, and could further destabilize the insurance market by enticing cost-conscious small-business owners to offer their employees cheaper plans instead of comprehensive ones. We should be working to make all health care more affordable, not adjusting coverage to fit sky-high costs.

A Climate change is real, yet we insist on acting like it doesn't exist or doesn't matter. The good news is that we don't need to choose between responding to climate change and helping the economy. There are major improvements we can make, and lots of them will create new jobs here in Minnesota. More funding for wind, solar, and energy efficiency improvement programs would create thousands of jobs here while combating climate change.

A I'm a fourth-generation resident of Crow Wing County. Minnesota is my home. When I was a teenager, my brother Will and I were diagnosed with Type 1 diabetes. I promised Will that I would find a cure and I've been working for people with diabetes ever since. I went door-to-door raising money for research and advocacy, then became the National Youth Advocate for the American Diabetes Association. I've lobbied Congress and state legislatures across the country to take action and fought for years to lower the price of insulin and protect people with pre-existing conditions like mine.

Most recently I spearheaded the effort to pass the lec Smith Insulin Affordability Act here in Minnesota. At 28, I became the youngest member of the Baxter City Council. I worked with my conservative colleagues to manage the city budget, worked with the police to combat sex trafficking, and worked with our local hospitals to expand mental health care options. In Congress, I'll do the same, working across the aisle to get things done. We must expand access to affordable health care, lower prescription drug costs, and make our economy work again for all Minnesotans.