It's official: City chickens are legal 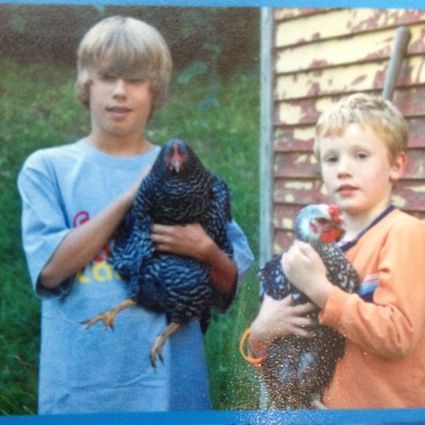 Billie and Jon Waugh and their three kids (Jack and Woody seen here) raised chickens covertly in their backyard for about five years before Cloquet officials stepped in. "I was every bit as sad as the kids to lose those chickens and would definitely consider having them again," Billie said.

After almost eight years of refusing to allow residents on normal city lots to raise chickens, the Cloquet City Council voted unanimously Monday to do exactly that.

The move came after members of the Cloquet Planning Commission recommended the change, and that hearing followed a movement started by Cloquet resident and chicken owner Emily Tracy, who circulated an online petition that garnered more than 1,000 signatures.

"When it comes to the benefits, well, they are endless," Tracy told the Pine Knot News this summer, when she decided to fight back against the city order that she get rid of her chickens.

It's not only chicken owners doing the chicken dance after Tuesday's vote. Former covert chicken owner Billie Waugh was thrilled to hear the news. Billie and Jon Waugh and their three kids raised chickens in their backyard for about five years.

"The chickens we kept were a great experience for my kids and the neighbors, and a source of nutritious food," Waugh said. "I am thrilled that our city council can finally see the value of this wholesome hobby for families!"

She also applauded Tracy, and the others who asked for changes before her. "I am thankful to the families that made this happen for our community, I was every bit as sad as the kids to lose those chickens and would definitely consider having them again."

There are restrictions to the new law, of course. They are sensible things, like having a coop for shelter and keeping the chickens inside a fence so they don't wander all over the neighborhood.

Want-to-be chicken owners will have to get a license from the city, which will cost $50 the first year and $25 every year after that for renewal. City Planning and Zoning administrator Al Cottingham expects the permit process to take about a week.

License requirements include lot size of at least a quarter-acre (10,890 square feet) for a single-family home, along with a secure and well-ventilated coop that includes windows. A fenced enclosure to allow for outdoor space may be attached to the coop. The floor and fenced area shall not be less than 10 feet of floor space per chicken. No coop or enclosed space can be closer than 25 feet to a residential dwelling on adjacent lots, and they cannot be located in the front yard. Waste must be cleaned up and food kept in rodent-safe containers. Prospective chicken owners must get written consent of at least 75 percent of the property owners within 100 feet, although vacant lots will count as a "yes" vote automatically.

While the vote Tuesday was unanimous, not every councilor was thrilled.

Ward 4 Councilor Kerry Kolodge said he preferred a half-acre lot minimum, but said he would support the code changes as proposed, as long as the rest of the council agreed to not take up the issue again and press for more changes.

Ward 3 Councilor Chris Swanson made that promise, after thanking the other councilors for agreeing to the quarter-acre minimum size, which will allow some of his constituents in the heart of the city to raise chickens.

"I think the issue is that some folks would like to have (chickens)," he said. "The challenge, of course, is that you have three dogs barking away, and a few chickens clucking, and it seems there are more concerns about the chickens than there are about the dogs."

City administrator Tim Peterson pointed out that having clearly defined requirements and laws in the city code will help staff when they get calls about chickens.

"There's an actual process we can tell people when they call, this lays out a formal complaint process," Peterson said. If there are three valid complaints within a year, the city can revoke the license.

"I know how much work chickens can be, so I suspect we'll see smaller numbers in a few years," she said.

The law will go into effect as soon as it is published in the public notices of the Pine Knot News.

Cloquet city councilors approved the hire of two new Cloquet police officers - Trevor Kaldor and Elijah Haglund - bringing the number of staff to a total of 22 out of 24 approved positions. Both will be required to complete three months of field training and have a one-year probationary period.

Hagland grew up in Buffalo, Minnesota; he has a bachelor of science degree in law enforcement from Minnesota State-Mankato, and graduated from the Hibbing Community College skills program in June.

Kaldor has been a police officer since 2011, after graduating from the Fond du Lac Tribal and Community College law enforcement program, where he was recognized with several awards for leadership and academic excellence. He worked for the Duluth Police Department for five years, before moving to LaCrosse, Wisconsin, where he was a police officer at the university. He and his family are moving back to northern Minnesota to be closer to family, police chief Derek Randall said.

Cloquet city councilors finished a continued public hearing on the 14th Street project discussed at the Oct. 6 council meeting. No one from the public spoke.

The road is actually a county road, so the street and sidewalk improvements - including a proposed roundabout at the intersection with Washington Avenue - are under Carlton County's jurisdiction, although the council approved the county's plan for the road improvements within city limits. The city will be replacing aged sewer and water lines that run under the street during the project. The estimated cost of the city utility projects is just over $2.4 million, with the bulk of that to be paid through sales tax dollars, plus an estimated $656,000 in assessments to adjacent property owners.

City administrator Tim Peterson said the city had received one letter from Atkins-Northland Funeral Home owner Bob Atkins, who feels it is unfair that businesses are charged a much higher assessment rate for street/water/sewer improvements than residents, in his case approximately $22,500 versus $7,100. Atkins said they don't take showers, do laundry or wash dishes like residents do, so they receive less benefit from city sewer and water than single do family homes, but pay more. He requested a lower assessment rate.

Councilors passed the sanitary sewer and watermain improvements with no further discussion. The expected two-year project will run from Cloquet Avenue to Prospect in 2021 and from Prospect Avenue to Tall Pine Lane in 2022.

In other street-related matters, councilors followed staff recommendations and did not vote to pave the roads in the Jolicouer Trails addition off White Pine Trail after a feasibility study determined the project would cost approximately $557,500. Of that, property owners would pay $167,000 and the city would need to find $409,000 to pay its portion. Although a handful of residents and the property developer presented the city with a petition asking for the improvement, it is not part of the city's capital improvement plan, which is based in part on careful assessment of city streets and levels of need and use.

Several property owners spoke during the online meeting. At least two don't want to pay the assessments that would come with a new road, and one favored the new road.

"I'm not all in favor of assisting a developer in increasing the value of his lots by taxing the people of Cloquet," Tom Christensen said.

The council voted for some cheaper fixes on the streets as recommended by staff at a cost of $60,000.

City administrator Tim Peterson pointed out that the developer could also consider improving the streets himself, or paying a greater portion of the costs.