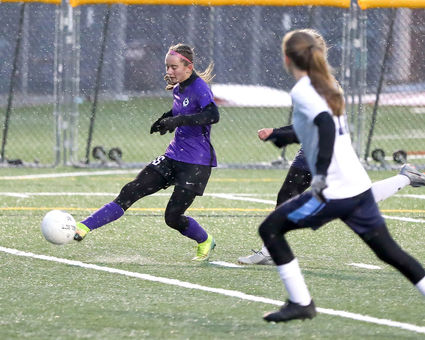 Cloquet's Jillian McCullough shoots for a goal during Monday night's Section 7A semifinal with Zimmerman at Terry Egerdahl Field in Proctor. A win brought Cloquet to the championship on Wednesday.

A smothering defense and an opportunistic offense was just what the Cloquet girls soccer team needed on a cold, snowy and blustery Monday night in Proctor. The Lumberjacks used the combination of solid defense and just enough scoring to beat Zimmerman 3-0 in the Section 7A girls soccer semifinals, which was moved up 24 hours because of bad weather anticipated for Tuesday.

Cloquet opened the scoring just a little over 10 minutes into the game when Jillian McCullough buried a nifty feed from Brenna Mattson as the Lumberjacks went up 1-0.

"Katie (Turner) dropped a pass back to Brenna (Mattson) who was making a fantastic run into open space," said Cloquet coach Bobbie Turner. "She drove the box, had great confidence on the ball and then just laid a beautiful pass across to Jillian, who had an awesome finish by driving the ball just right across the net."

The Lumberjacks thoroughly dominated time of possession and the Thunder were able to muster only one shot on goal for the entire game. The Cloquet-Carlton back line never allowed the Thunder to get behind them as 'Jacks goalie Gracie Meagher faced only one shot for the game, and never saw a shot in the second half.

Cloquet's second-half effort was aided when a Thunder player was whistled for a red card early in the half when she batted down a sure goal from in front of the net.

"We had so many great scoring chances, but just weren't able to finish," said Turner. "Then we had a good scuffle in the box and got the ball back to Olivia (Jameson) and she sent a rocket right on frame. Their defender batted it down with her hand, so she got the red card. It was absolutely the right call, but I know it's a hard one for a ref to make, so it was appreciated."

Being a player down made things tougher for the Thunder, who seemed to be in awe of Cloquet's speed. Eventually the 'Jacks notched a second goal when Mattson scored another scramble in the 56th minute to push the lead to 2-0. Cloquet's final goal came when Alexa Snesrud jumped on a loose ball in front of the Thunder net with 8 seconds remaining to top off the scoring.

"Defensively, tonight was about composure and making simple passes rather than playing the long ball out of the back," said Turner. "I think it helped set the tone everywhere on the field. Our passing was patient and really well executed."

Cloquet first had to beat Hermantown in the Section 7A quarterfinal game last week to advance. On Thursday night the Lumberjacks rode the hot scoring of Jillian McCullough and Alexa Snesrud, who buried three goals each to a 6-1 win.

After falling behind 1-0 in the 14th minute the 'Jacks responded with just three minutes remaining in the first half to tie the game on a Snesrud goal. The second half was all Cloquet-Carlton, who struck five times in the second half to pull awa. 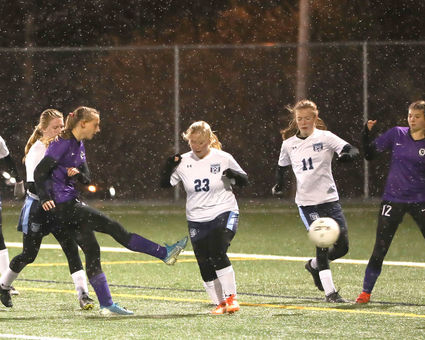 Cloquet's Olivia Jameson takes a shot during Monday night's Section 7A semifinal match with Zimmerman, which was moved to Proctor's turf field from Cloquet as winter weather threatened.

"At the end of the first half I moved one of my center mids, Jillian (McCullough), to the right forward spot. She used to play outside mid for me for years so I wanted to see if she could change the dynamics up front," said Turner. "Maddie Young went to the center mid spot and she and Brenna Mattson did a really great job of getting the ball up to the forwards to get the offense going."

Cloquet defeated Duluth Marshall 1-0 on Wednesday as this issue of the Pine Knot News went to press.

The Lumberjacks defeated Duluth Marshall 1-0 for the Section 7A championship at Public Schools Stadium Wednesday night. Look for lots more on the final game of the season in next week's Pine Knot News. In a normal year, it would have meant a second-straight trip to state.

The CEC boys were stunned in a semifinal match with Duluth Denfeld. Find details on Page 13.

Visit PineKnotNews.com for more photos from all sports action the past week.