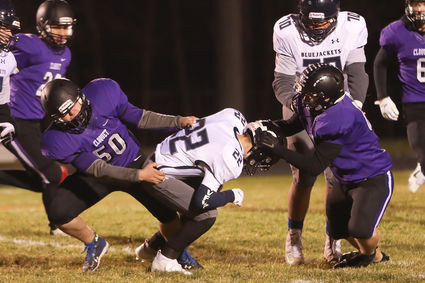 "We were able to pretty much do whatever we wanted in this game," said Cloquet coach Tom Lenarz. "We controlled the line of scrimmage on both sides of the ball throughout. I have been very happy with the O-line play in particular. The ability to run the ball like we have will be important as the weather continues to get worse."

Deeken Fjeld opened the scoring onslaught for the 'Jacks with an 8-yard touchdown run with 2:48 remaining in the first quarter. After Marshall Hayes added the two-point conversion run, Cloquet was up 8-0. Less than a minute later, with 1:42 left in the quarter, Cloquet's Damian Diver raced 17 yards to pay dirt, giving the Lumberjacks a 14-0 lead. As the quarter expired, Reese Sheldon caught a beautiful pass from quarterback Alec Turnbull and raced 55 yards to score and again Hayes added the conversion points, making it 22-0 at the end of the first quarter.

"It is always tough to keep kids focused in games like this," Lenarz said. "I thought our guys did a pretty good job. I was very happy with the sportsmanship we showed throughout the game and the way we represented our program and community. Obviously the score was lopsided but the kids were just as quick to help a Hibbing guy off the ground after a play as they were to celebrate. We have good kids."

Cloquet added four more scores in the second quarter on a pass interception by Will Turnbull, a Diver 32-yard touchdown run, an 18-yard touchdown dash by Hayes and a Diver 70-yard touchdown sprint. At halftime the 'Jacks were up 54-0.

Despite the score, the 'Jacks were constantly changing personnel as they continued to give reps to their entire roster, which also resulted in some sloppy play. Of course the cold weather didn't help, as the game-time temperature was 28 degrees.

"We are young, but the guys in the backfield are all very talented. You are seeing some of the growth that needs to occur when guys play their first varsity snaps and there are lots of nerves and inexperience with the level of contact," Lenarz said "Learning to execute the plays as they are designed is sometimes tough for young talented players that have been able to get away with bad habits in the past. There is no denying we have some pretty fast guys, but there is a lot more to football than being fast."

Cloquet added an 8-yard run by Sean Sarkela and a 51-yard touchdown dash by Alex Peterson in the third quarter while Hibbing sandwiched a touchdown of its own between the two scores by Cloquet. The 'Jacks lead stood at 68-8 after three quarters.

Hibbing managed two fourth-quarter touchdowns while the game was in running time and Cloquet also scored its final touchdown of the game on a nifty run by Leith Lockling where he split the defense and ran 49 yards to score, making the final 76-22. 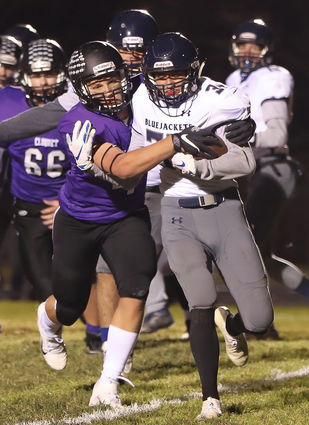 It isn't often a coach can see his team score 76 points in a game and still be able to say his team did not play as well as they can. Lenarz knows the Lumberjacks will need to address the fact that they fumbled the ball too frequently against the Bluejackets.

"It's what I was talking about before. Most of these turnovers are a result of guys who need to address bad habits and have very little varsity experience," Lenarz said. "The shortened preseason hurt us a little in this way as well. We only had four contact practices before our first game. Given the Covid rules and how small our rosters need to be, we can't do a lot of full contact stuff now during the week. It is something we will continue to address weekly and hopefully the guys will be willing to correct some of these issues."

The win pushes the Lumberjacks record to 2-0 on the season. They travel Friday night to play at Proctor.