Rebels rumble to win against Eskomos 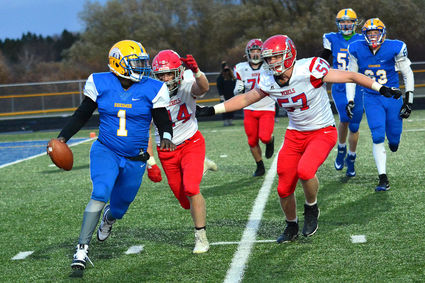 "Jackson Thompson had a breakout game versus Esko, playing every snap on offense and defense," said Rebels head coach Dave Louzek. "He is a very strong, hardworking kid who is going to be a great Rebel football player."

Esko scored first when quarterback Kevin Gregory scampered in from 4 yards out, giving them a 7-0 lead after the extra point kick by Wyatt Stankiewicz. However before the first quarter ended, the Rebels took a one point lead on a Thompson 30-yard touchdown run and a two-point conversion run by Logan Overdahl.

In the second quarter the Rebels pounced once again, when quarterback Mason Olson hit Landon Kurhajetz on a 70-yard touchdown pass and catch, making it 14-7 after the failed extra point. The Eskomos responded in kind with a 14-yard touchdown run by Gregory, cutting the lead to 14-13, but the extra point kick didn't connect so the Rebels kept the lead. Right before halftime, the Eskomos picked off a Rebel pass and had a chance with a first and goal from inside the 10-yard line, but failed to score. That would come back to haunt them in the second half.

"It would have helped if we had scored because we were getting the ball to begin the second half," said Esko coach Scott Arntson.

"That would have been a big swing if they had scored," said Louzek. "They were receiving to start the second half. Our defense stiffened when they needed to and they made an important stop." 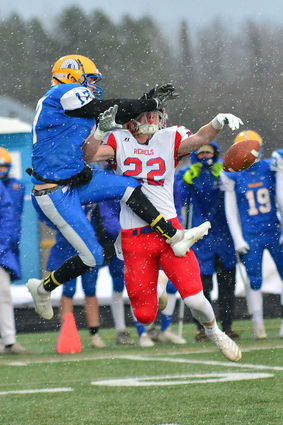 The Rebels scored again early in the third quarter when Orvedahl hit Thompson on a 30-yard halfback option scoring strike, but again the Rebels failed on a conversion attempt, giving them a 20-13 lead. Much like they did in the first quarter, the Eskomos reacted with a Gregory touchdown pass of 63 yards to Mason Perich, then Perich efficiently tacked on the two-point conversion run, giving Esko a 21-20 lead.

Thompson took over the game late in the third quarter and the fourth quarter by scoring the next two touchdowns for the Rebels: the first on a 43-yard touchdown dash and the second on a 21-yard scamper. Thompson added a two-point conversion run on the final score, making the final 34-21.

The victory improved the Rebels' record to 2-0 on the season while the Eskomos fall to 1-1.

The Rebels will be at home against Crosby-Ironton on Friday night and the Eskomos will travel to Pine City to take on the Dragons.