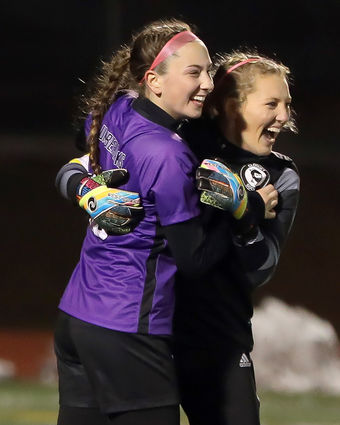 Goaltender Gracie Meagher saved her best game for the last game of her senior year as the Cloquet girls soccer team held on for a 1-0 Section 7A championship win over Duluth Marshall last Wednesday night in Proctor.

Meagher faced a barrage of shots throughout the game, but in the second half of Wednesday's game she was called on time and time again to hold the Lumberjacks one-goal advantage.

"Gracie was amazing on Wednesday. She's been solid all season and has just continued to get better and better," said Cloquet coach Bobbie Turner. "I really can't say enough about the game she played. She was passed over for all-conference this year and I think she proved beyond a shadow of doubt that she deserved to be on that list."

The Lumberjacks gained a lead on a great play 30 yards from the Marshall net when Cloquet junior forward Katie Turner launched a kick that somehow found its way into the bottom right corner of the Hilltopper net with 10 minutes gone in the first half.

"Elle Carlson slid a perfect ball to Alexa Snesrud in the middle and she slid it one more over and from there it was just a one-on-one," said Katie Turner. "I just decided to take my open shot from there instead of dribbling any closer to the net. I didn't notice the ball had any curve to it until it bounced once and the goalie had taken two steps the wrong way and had to dive back to try and save it. I was surprised!"

The second half became a nail-biter as the 'Jacks clogged the middle of the field and played tight defense on the talented Hilltoppers. Essentially, the Lumberjacks put the game into the hands of their goalie Meagher and their team defense, especially their back line.

"Our back line is such a solid unit and they played an amazing game," said coach Turner.

While the defense was doing its part to try to stymie the vaunted Marshall attack, it was Meagher who was called on to make a number of huge saves in the second half.

"My team played an amazing defensive game and all the girls played their hearts out," said Meagher, who has committed to play soccer at the College of St. Scholastica next year. "I think we all had a defensive mindset in that second half and we were determined to not let them score and to keep our lead. The defensive line of Katelyn Kelley, Sadie Senich, Mireye Moose and Brooklynn Simminds played so amazing. And Olivia Jameson also played a huge role at midfield."

Despite the tight defense, the Hilltoppers still had a couple of good scoring chances - including one where Meagher flew out of the net to shut down a mini-breakaway with 10 minutes remaining.

"I kept glancing at the clock every so often and I just kept telling myself 30 more minutes, 20 more minutes until zero finally hit on the clock," said Meagher. "It was an incredible feeling to win the section title again. All of our efforts in that hard-fought game were rewarded and it felt so good."

The victory gave the 'Jacks their second consecutive section title.

"During the second half we knew our scoring chances would be low, so we figured packing our backfield would be our best bet," said Katie Turner. "Gracie definitely saved the game for us a few times. We're all so thankful to have such a brick wall in our net." 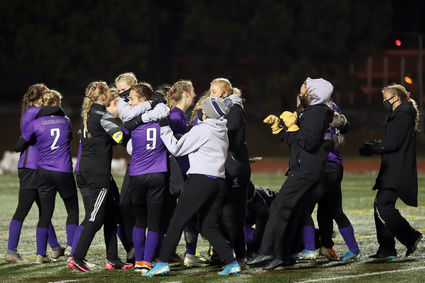 "This was a really special group," said coach Turner. "They are just so close and so cohesive. They worked so hard and put in a lot of hours of training to get here again this year. I'm really proud of them. We are graduating six seniors and they will be missed next year for sure. They all showed so much leadership and poise in this weird season."

To cap off that weird season, the entire girls team is now quarantined, because a player tested positive for Covid after the championship game and it's too difficult to tell who was exposed to whom during practices, Superintendent Michael Cary said during Monday's school board meeting

There is no state tournament this year, so the quarantine will not affect Cloquet's now completed postseason play. The 'Jacks finished the season with a 13-1-1 record.